In the late summer of 2021, Ann Stanley visited The Veggie Empire at their Beales Road Farm in Greensborough. 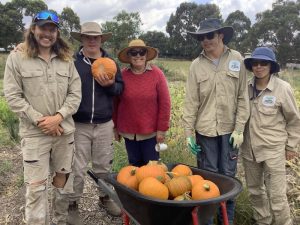 Josh Hogan and Scott Jordan, along with their specialist supporting horticulturalists, are The Veggie Empire. Under the leadership of educator and people-connector Rachel Bishop, they are best described as a community urban agriculture team and are based at Beales Road Farm in Greensborough.

Throughout the working week, Josh and Scott are supported to grow food and food plants while learning and maintaining work skills on the small urban farm and in the local community. The overall aim of their efforts is to be paid to work in the urban farming / horticulture sector.

Beales Road Farm is situated on one acre of leased land in Greensborough. The land is generously shared with the team by the householder Hayden McLean, who lives in the 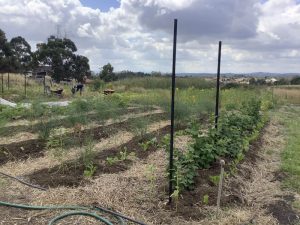 cottage on the site. There is little signage at the entry to the property because it is Hayden’s home, and also a workplace, so visitors are not encouraged.

The Veggie Empire came about through the fortuitous meeting of Josh, Scott and Rachel at a disability day service where Rachel’s interest in both education and urban agriculture had led naturally to the building of a productive garden alongside the day service participants.

“Connecting with community members who were interested in what we were up to was really important in the early stages of our food growing journey. We had the biggest ‘permablitz’ ever at the day service in April 2010 which is still talked about today as it brought so many local community members together over food production,” says Rachel. 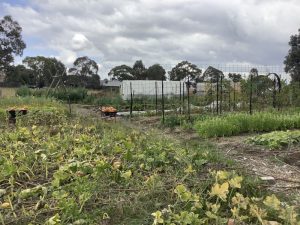 The day service food garden was closed down at the end of 2011 but the bond between the three was firmly established and Scott and Josh announced that they would follow Rachel wherever she went.

Rachel remembers, “At the time I was working part time at Edendale Farm in Eltham as an Environmental Educator so Scott and Josh said to me, we can just come to Edendale with you! I said, okay, let me work out how we’re going to do that!“

They secured some funding through Living and Learning Nillumbik to run a course in work skills based in the gardens at Edendale. Following this course, Josh and Scott enrolled to work as volunteers at Edendale, where they utilised their 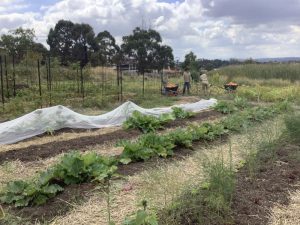 NDIS funding to employ supporting horticulturalists to work alongside them as they continued to learn and practice valuable work skills in a community setting.

The beginning of the pandemic in 2020 interrupted the team’s long term volunteer gig at Edendale. This enforced break enabled the team to establish a small seedling enterprise at Beales Road Farm, where they now produce and supply the food plants that are sold at the retail nursery at Edendale.

Community connections are really important to the team. In addition to working at Beales Road Farm, Josh and Scott support other community gardening places through volunteering. The Diamond Valley Library, Greenhills Neighbourhood House and the 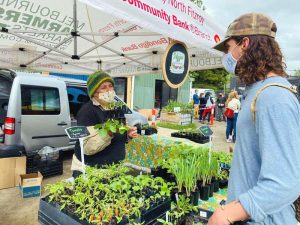 The team often sell veggie boxes or run farm tours, both of which are advertised via their social media pages. They can also be found at Alphington Farmers Market on the 2nd and 4th Sundays of the month selling seasonal veggies and herb plants.

One of the team’s supporting horticulturalists is Mayumi (May) Middleton. May moved from Japan 11 years ago. She had been interested in gardening in Japan and, once her kids were at school, she made her way into urban agriculture via a working bee at Friends of the Plenty River, a horticulture course at the Melbourne Polytechnic and volunteering at Edendale. Initially, after completing her horticulture course, she worked as a 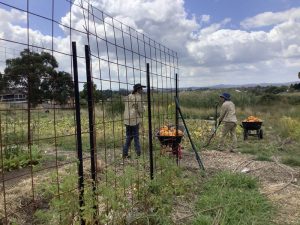 park ranger but was concerned about the chemical spraying. May met Rachel at Edendale and Rachel was impressed with her work ethic and her approach to supporting Josh and Scott so she was subsequently invited to join The Veggie Empire team.

“The way that the support team describe what we do with our NDIS funded team members is that we work as a ‘guide beside’ the participant. Support team members are doing the work too and, at the same time, checking in with our participants who need support to complete horticulture tasks on the farm,” says Rachel. 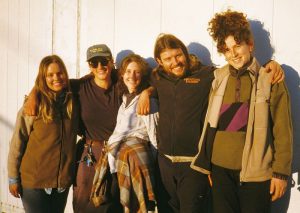 Rachel met the Farm Raiser crew at the ‘Local Food Launchpad’ entrepreneur course in 2018 and a close working relationship was established between the two groups of farming friends who regularly share equipment, space, produce, expertise and a farmer! Of the relationship between Farm Raiser and Veggie Empire, she reflects, “We were looking for an urban farmer to join the support and Patrick was a natural for the role.“

When I visited the farm in late summer, the team, 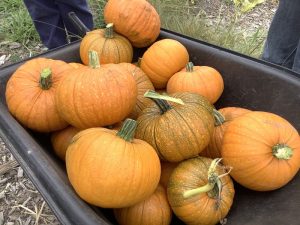 including Charlotte and Patrick, was harvesting pumpkins, some of which were going to Farm Raiser for their weekly veggie boxes along with some of the Veggie Empire’s 2020 garlic, bringing valuable income to help maintain Beales Road Farm.

“This type of cross-pollination is one of the best parts about being involved in community enterprise,” says Rachel.

The Veggie Empire have their own work uniform worn by all team members. This is important to Josh in particular, who says, “I like getting up in the morning and having something to do and I’m proud to wear the Veggie Empire logo.“ 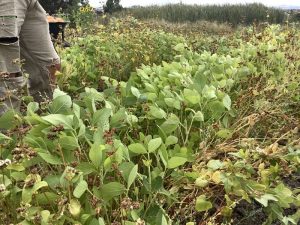 Josh, along with Patrick, took me on a tour of the farm, pointing out the different crops and discussing the soil. Scott, meanwhile, worked in the sheltered propagating area, preparing seeds and listening to the radio. Josh, who once played in a band that played at the same venue as U2 (Josh reflects that, whilst U2 didn’t manage to fill the venue, his band, Rudely Interrupted did.), also enjoys working in the nursery, especially potting up. “I like the feel of the plants and how delicate they are.“

Rachel believes that Josh and Scott have significant achievements that are worth sharing. In the future, because of their connections with Farm Raiser, Rachel sees the potential for them to provide mentoring for other young people. Josh likes to teach and Scott likes to show people what he can do. 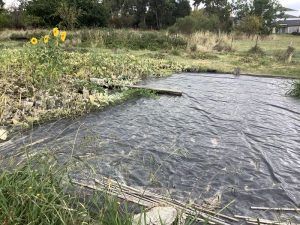 “It’s been a slow journey but everything has been for a reason,” says Rachel who sees social enterprise in the area of urban farming and food production as a wonderful opportunity for people to make a contribution to the community and earn an income.

“‘We really want to showcase our model so that people anywhere, particularly those who are marginalised from vocational education, can start and do it themselves whether it’s a small market garden or a couple of fruit and veggie boxes.“

Rachel Bishop is a skilled connector of people with compatible ideas and is alert to opportunities for collaboration. Beales Road Farm demonstrates the potential for linking diverse people with government initiatives and vacant land to make a significant contribution to urban sustainability through small scale urban food production for local communities.