The author of this article, Stuart Rodda, is an avid gardener who lives in Eltham. 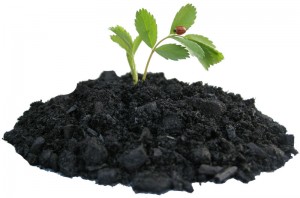 Ok, you may have heard of biochar (courtesy of Malcolm Turnbull) but what are those other two things in the heading of this article? Before I explain, I should mention that most of what follows is pretty new to me and I am looking for further information from any source I can find, including you, the reader. Please email me.

These three terms – terra preta, biochar and Leonardite – all relate to soil. Our soil is what sustains us through the food that grows in it and on it, so it is vital that it remains healthy and productive. For Eltham gardeners, where I live, there is also the vexed question – how do I turn Eltham clay into a rich garden soil?

The story begins with terra preta (= “black earth”), a rich black soil found in the Amazon basin. Most Amazon soils are yellow and very poor due to the high rainfall and mineral leaching, but a deep fertile black soil was found there which was apparently deliberately made by humans over thousands of years by modifying the original soil (the presence of broken pottery in these soils was the clue which pointed to their man-made origin). It appears that the main modification was the addition of charcoal to the soil (along with waste materials from their habitations). Further reading on Wikipedia and elsewhere will fill in the details, but suffice to say that those native South Americans were pretty smart to invent an agricultural system which could sustain large populations on poor soils. We have a lot to learn from them.

Biochar (a form of charcoal)

Modern thinking about this soil fertility story leads us to the current worldwide interest in biochar. Biochar is a term for a form of charcoal used for soil improvement. The charcoal is usually made by heating woody material in an oxygen-poor environment, then processing it further to prepare it for adding to soil, e.g. by pulverising it and adding some fertiliser and microbes. There are a number of motivations for making biochar:

Biochar on its own does not produce dramatic growth effects, but it does reduce the need for added fertiliser and water. Different biochars can have different effects, for example a biochar made from chicken manure will have higher fertiliser effects than one made from common woods. If the data from the Amazon soils is correct, the beneficial effects will last for a long time, maybe centuries, so adding biochar to poor soils (with some fertiliser) has the prospect of converting them to a Terra preta-like soil.

Now where does Leonardite fit in? And what is it anyway?

Leonardite is a type of brown coal-like material. It has many properties in common with humus, that dark coloured end product of breakdown of organic matter, especially woody material. Amazingly, it is found in only a few places in the world, and one of those places is right near us. The Maddingley brown coal deposit at Bacchus Marsh is a Leonardite-type material and it is sold for use in commercial agriculture. Its value as a soil additive is currently under trial in various locations.

Are biochar and Leonardite more or less the same thing, being based on carbon? No; while they have some desirable properties in common, such as holding moisture, they are quite different. For example, Leonardite holds lots of soil minerals and releases them to plants whereas biochar is relatively inert but provides lots of surface area for microbes and root hairs to colonise.

If you are as excited as me about what these materials can do for our difficult Eltham soils; then I have some bad news for you. None of the materials is easy to obtain at a reasonable cost.

The few sources of biochar (as found on the internet) are quite expensive, especially on a dry weight basis. Pure charcoal can be purchased but the type used for water purification is expensive – upwards of $5/Kg; and pure charcoal made for burning in BBQs can be bought for around $1.50/Kg but would need to be crushed down to a smaller size before use in soil, and ideally would be pre-treated with fertiliser and microbes (e.g. compost or manure) before use. Horticultural charcoal ready for use can be bought at Bunnings for about $1.60/litre, but charcoal is light, so that works out at $4/Kg. A company called Graysons, in Bayswater, sell biochar at $23 for 25 litres (approx. 8-9 Kg), i.e. around $3/Kg. A relatively cheap and common source is the charcoal that is sometimes left unburned when a fire goes out or is doused with water. In my case, I had a burn heap where charcoal had accumulated over years and I have now set that aside for garden use. It has the added advantage of being mixed with ash, a rich source of potassium and other important minerals. Also, Bulleen Art and Garden (BAAG) sell a bulk soil improver (~$80/cubic metre) which is based on composted wood with added biochar, although the amount of biochar is undefined.

The situation with Leonardite is a bit more hopeful. It can be purchased in bulk at Maddingley (Bacchus Marsh) for about $45/tonne (i.e. about 5 cents per Kg), but only in bulk, not the smaller amounts most home gardeners would use. Thus, home gardeners who are keen enough would need to take a trailer there and get loaded up. At least you would have plenty! Just be warned that both biochar and Leonardite are fairly dirty so be prepared with old clothes, gloves etc.

Before I finish, I should mention zeolite. Biochar and humus are both long lived forms of carbon which provide water holding and mineral holding functions in soil. Zeolite is a mineral which does the same, and is available in crushed form for mixing with soil, so could be considered as another way of improving the fertility of soils long term. However, it is probably not as useful at promoting soil life (microbes etc.) and good soil structure as are charcoal and humus. Zeolite is available at BAAG for $18 for a 25Kg bag.

4 Responses to “Terra Preta, Biochar, Leonardite and the home gardener”

Testing the pH of your soil