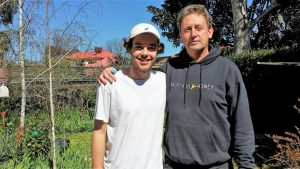 Peter Dyer is a registered apiarist and one half of the dynamic duo behind the business, Backyard Honey. He knows a lot about pure Australian honey so I’m keen to hear his story.

We’re sitting in his suburban home – Jane, his wife and fellow apiarist, isn’t here as she is hosting a honey-tasting for Leo’s Heidelberg, but Peter’s apprentice, Liam, is. He’s a young man who obviously enjoys working with bees. “I love it” he says, with an enthusiastic grin and I wonder how many young men or women of his age have taken to beekeeping quite so ardently. 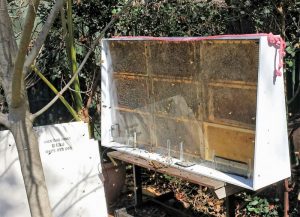 I glance out of the kitchen window and see a small backyard flush with the signs of spring. In one corner is an unusually shaped box which I guess is some sort of beehive and in another a stack of traditional square beehive boxes. The yard is vibrant green punctuated with floral hues which no doubt excite Peter and Jane’s insects, their European honey bees (apis mellifera), even more than they might excite a keen gardener.

Peter tells me about the ‘watered-down’ (or ‘fake’) honey which, until recently, was sold in Australian supermarkets. He says that this honey was sourced from Asian suppliers and import-tested in Australia using local facilities. It seems that the issue is that the standard Australian C4 Sugars Test used to determine if pure honey has been adulterated is an old style test and that magnetic resonance imaging tests, as used in Germany, are necessary to determine if honey has been adulterated.

Australian apiarists have been suspicious of the quality of imported honeys for some time, but their suspicions were only confirmed when samples were submitted to a German laboratory for testing. Results revealed a range of contaminants that brought about media coverage and hasty product withdrawals. It sounds like Australian honey is a clear winner.

So when and how did Peter and Jane come to be apiarists, and when did they create their bee business? Whilst their former careers – Peter has a Bachelor of Science and Accounting and Jane a Diploma of Education with background in Zoology, Biology and Geography – may have been beneficial, they certainly didn’t lead to this new career path.

Peter tells me that several years ago he and Jane invested in rural Victoria – they bought a 40 acre “off the power grid” paddock dotted with remnant gum trees. It was to be their escape from suburbia, their weekender, but they also saw it as a productive space. Their challenge was how to achieve their intention?

As they didn’t want to clutter their paddock with heavy infrastructure or cloven hoofs, and visited too infrequently to maintain chickens or ducks, they considered other avenues. They could see that the existing old eucalypts, boxes and messmates, were valuable as shelter for the previous owners’ stock and wanted to ensure that they continued to provide an important refuge and breeding site for bush-dependant creatures.

Then they thought of bees – independent, productive, fascinating bees. They started reading everything they could and Peter subsequently placed a book entitled Bee Keeping in Australia which was written by Eltham beekeeper, Bob Owens, high on his list of informative material. 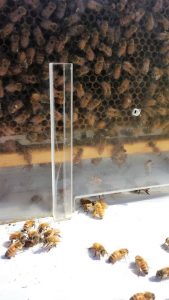 … which then becomes a business

So good was the honey, so interesting were their bees, so rewarding was the farming that from one hive came more and soon they were spreading (like honey) the news that beekeeping wasn’t about robbing hives, it was about working with bees, ensuring bee health, contributing to the well-being of our environment and harvesting 100% pure raw unheated Aussie honey. It was also about working with amazing colonies of highly organised insect communities.

Before long the business, Backyard Honey, was born. Peter and Jane began placing hives in Melbourne’s northern and eastern suburban backyards and travelling to areas as distant as Lorne, Woolamai and Warrandyte.

Of course, time and space constraints demand that some apiary clients choose only to host their beehives and to have Peter and Jane tend them while others clients opt to tend them themselves and extract their honey with only minimal advice from the beekeepers. Tailoring apiary services to cater for a range of individual needs is all part of Backyard Honey’s service. 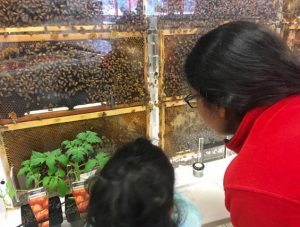 A look at the Backyard Honey website will tell you that there’s a lot more to this business than you might think. As well as supplying healthy honey bees, training their keepers, visiting the hives and collecting the honey, Peter and Jane visit schools, clubs and community organisations to raise awareness of the important role bees play in our lives. They also provide a swarm collection service and sell their honey and related products to many Melbourne outlets.

Peter and Liam told me many fascinating facts about bees. They talked about queen bees and their life and death decisions, the highly coordinated work of bee communities, and bee communication – the amazing ‘waggle dance’ which, although performed in total darkness, enables bees to describe exactly where their co-workers should go to find pollen. I heard about the annual lifecycle of bees – the sudden rush of activity during spring to collect pollen, honey storage, management of hive populations, rest times when quotas are reached and lean times during late winter when the hive’s coffers are emptying. 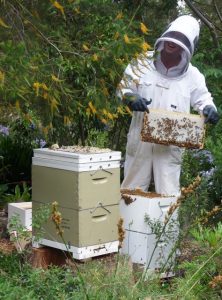 It was almost time to go when we visited the unusually-shaped hive that I had noticed through the window when I first arrived. Peter developed this display beehive to use on his regular bee advocacy incursions to schools, universities, councils and community groups. It enables the bees to work undisturbed while being watched. He offer to ‘suit me up’ to get closer … but I prefer to watch from a distance, mesmerised by the constant movement of airborne insects as they float in and out of a tiny hole leading to their bee larder. Peter confidently, but respectfully, moves up close and takes several photos.

I thanked Peter and Liam for their time, purchased my own little jar of pure Backyard Honey and made my way back to Eltham.

When I was young I was constantly warned about the dangers of bees but now, when I walk over our dandelion carpeted lawn, I look forward to the time when that carpet turns yellow with flowers and the air is filled with the hum of industrious apis mellifera bees.