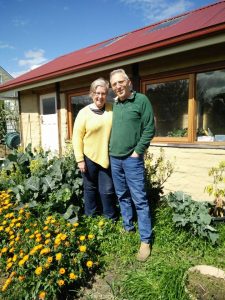 I have known Robin and Paul Gale-Baker since the beginning of Sustainable Macleod and the Macleod Veggie Swap in 2011. In 2015, work on the Macleod Organic Community Garden commenced, with Robin and Paul as driving forces. I appreciate the time and energy that they have put into these initiatives. I’ve also been privileged to see their garden evolve over time and to learn about gardening from them.

Robin and Paul both have a history of gardening dating back to childhood. Their grandfathers (and then fathers) used to grow vegetables on their respective suburban blocks and their grandmothers used to grow flowers. They have each grown fruit and vegetables in a wide variety of soils and climates in both Victoria and Tasmania, from rock hard clay to sandy soil that holds little water.

In 1977, having recently returned from several years in Europe, Robin started a herb nursery in Tasmania, near Hobart, initially called ‘The Herb Garden’ but later ‘Middle Earth Herbs’. This was the first herb nursery in Tasmania and she retailed from her 16-acre property (previously a zoo), sold wholesale throughout Tasmania, and sold every Saturday morning at Salamanca Market for a decade. The property also supported a vegetable garden, 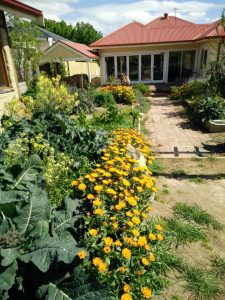 As I look at the current back garden on their quarter acre block, I see that it is varied and essentially divides into ‘rooms’ but still holds together as one theme. It is a potager garden featuring mainly Mediterranean plants. Up the centre of the garden, in a T formation, is a faded red brick path. The bricks were recycled from a dismantled chimney – a beautiful variation in colours that looks warm and natural. Either side of the path is what Robin and Paul refer to as ‘the left bank’ and ‘the right bank’.

On the left bank is a long curving hedge of flowering lavender in front of which grow culinary herbs and orange calendula and behind which is an almond tree, persimmon, olive, pomegranate and feijoa, all underlaid with 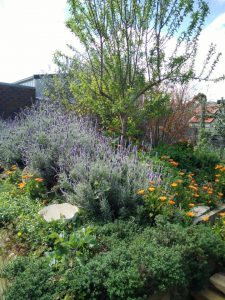 On the right bank, in the foreground, are more small-leaved herbs – thymes and savouries – draping over a wall of wooden sleepers and these break up the straight lines of garden edging. They are interspersed with small guava shrubs and, behind this, there is a circular herb and vegetable garden whose focal point is a medlar while along the fence are two figs and a pomegranate. Different blocks of contrasting colours pop out – mostly shades of green and maroon from various types of lettuce.

As I look more closely, I notice some surprising things: a faded orange antique kid’s tricycle, some colourful pottery vases, and a full-sized rusted metal statue of a brolga (named Olga). There is a richness of colours here – some melding, some contrasting – that gives the garden vibrance: large green cabbage leaves, orange calendula flowers and wispy 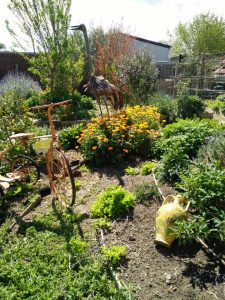 brassicas with pale yellow flowers that attract the bees.

Sitting beyond the circular garden is a mudbrick potting shed that Paul recently built. Robin has long wanted a place that allows her to spend time in the garden in the winter, so this shed has been a dream of hers for years. It has a recycled ochre-coloured colorbond roof and painted doors to match; earth colours, giving the garden a Mediterranean feel. Embedded in the shed wall facing the deck, is an interesting speckle pattern made from the glass bottoms of recycled bottles.

It is the back of the garden where the permaculture design is most evident. There’s a 3 bay compost system next to the chicken coop, and the coop leads into the orchard which contains 11 stonefruit and apple trees as well as 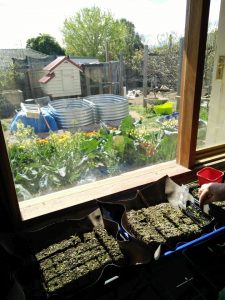 4 x 1000L water tanks that fill from the potting shed roof. The chickens range in the orchard, keeping both it and them healthy. They are also kept healthy by plantings of rosemary, lavender, rue, wormwood and southernwood. The chicken litter feeds directly into the compost system.

Also in this area are permanent beds for raspberries and asparagus, and two espaliered pear trees with thornless blackberries growing at either end. This is close to a lovely shaded spot that will contain an old wooden seat and provide great views of the garden during summer.

Robin and Paul then showed me the front garden. It has a meandering gravel path among citrus trees, cape gooseberry, tamarillo and babaco, plus a beautiful mulberry tree that helps cool both garden and house. It has a graceful flowing structure and gives a sense of permanence – an oasis. 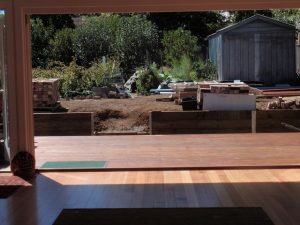 There are two wicking beds for vegetables and borders of flowering plants. Many self-sown plants are allowed to flourish.

This front garden was weed on clay when Robin and Paul bought the house in 2003. To convert it to what it is today, cardboard and newspaper was laid over the whole area and then a no dig garden built on top of this. After several years, the area was weed-free and ready for permanent planting.

Similarly the backyard, had no garden and comprised grassy weed. The soil was developed over a number of years. However, 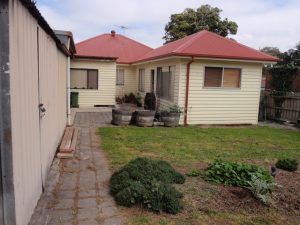 renovations 5 years ago necessitated the removal of top soil and so they had to start from scratch again. Gypsum was spread, massive heaps of horse manure and litter were composted and spread, and some ‘veggie mix’ soil was added. Over time, more and more compost was added. Garden paths were maintained by layering sawdust (and occasionally pistachio shells) on them, to keep weeds down and to make a water-permeable path, and eventually becoming soil.

Paul is a permaculture designer who runs ‘Urban Shepherd’. His design and building skills have made their garden a delight as well as functional. He tailormade the chook-house, mudbrick potting shed and compost bays. He also designed and built the espaliers and the specialist beds for asparagus and berries, plus the wicking beds for vegetables. He has completely netted the stonefruit and apple orchard with a simple structure comprising poles with tensioned stainless steel wires over which netting is stretched. The netting is then attached to the paling fence on 3 sides and the top of a chicken wire fence on the fourth making it bird proof.

It’s a real pleasure to be invited to see this garden and see how it has evolved. Of course, gardens are different in each season and Spring is probably the time of year when they are at their most beautiful. Each garden is unique, showing the loves and interests of their creators. I love reading about people’s gardens and community gardens, particularly the other interviews on this website.

Both Paul and Robin have been involved over the years with various sustainable living groups and initiatives. They are both active in the transition movement. Paul was a founding member of the Moora Moora Co-operative community. Paul is also a counsellor and Robin a retired psychotherapist.