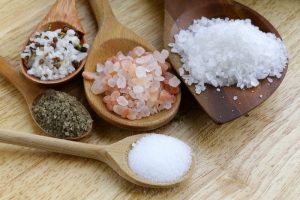 When you go into the supermarket these days you are presented with a gazillion variants on just about anything, even though you’re pretty sure they are all the same.

And as if it wasn’t confusing enough, now there is a host of different salts to choose from. Your regular old table salt is now competing with exotic-sounding sea salt, Himalayan pink salt and kosher salt.

But what’s the difference?

Here is the short version of the story. Table salt is heavily refined. That means that it’s up around 97% pure sodium chloride, which is actually something we need on a biological level. The refining process removes most of the impurities in table salt, which includes most of the trace minerals as well. Table salt also has iodine added to it, as iodine deficiency is a legitimate concern in the average public diet. You can get enough iodine from fish, eggs, dairy and seaweed (don’t say ‘ew!’ Think sushi! Yum!) but in most cases we don’t eat enough.

But it’s not all sunshine and roses with table salt. Since it is so fine it’s almost a powder, it has a tendency to clump together. At least it does before the anti-caking agents are added. They prevent the salt from sticking to itself, but there’s been little research on how they affect our bodies.

Surprisingly, sea salt does largely come from the sea. Normally when I hear an item labelled with such succinct alliteration I assume it’s a gimmick, but sea salt is actually made by evaporating sea water…

Ok, sometimes it’s just normal water with salt added to it, which seems counterintuitive. You’d be amazed what people buy! I digress…

The evaporative process creates salt crystals, which is why sea salt isn’t as fine or pourable as table salt. If you sprinkle it on your food after its cooked you’ll be more likely to notice it when you eat. Those crystals provide a concentrated burst when clumped together. It is also much less refined, leaving room for trace minerals like potassium, iron and zinc. The darker the colour, the more impurities and trace nutrients are present.

But it’s not all smooth sailing (see what I did there). Because sea salt is made from sea water without the refining process, you can also end up with trace amounts of heavy metals like lead in your salt. Just something to be aware of.

Which takes us from the depths of the ocean to the highest place on earth. The Himalayas (well… not too far from there). The famous pink salt comes from the world’s second largest salt mine, which is in Pakistan. Yes, you heard me. Salt mine. Most of our salt actually comes from underground. So why is Himalayan salt pink? Truth be told, that exotic, alluring pink colour that we’ve come to crave is a little thing called iron oxide. Or, more commonly, rust.

Now kosher salt may have you scratching your head. If you’re not preparing Kosher meals you may see it on the shelves and wonder “What’s different about it?”. It’s not so much about what it is as much as what it does. Kosher salt is coarse and ideal for extracting blood from meats, which is part of the process for preparing kosher meals. That coarseness and flakiness also appeals to a lot of chefs simply for being easy to pinch. You know, add a pinch of salt? Probably kosher salt. It’s also far less likely to contain iodine or anti-caking agents.

If you’re using salt in your cooking, they are close enough to the same to not make a real difference. But if you’re sprinkling them on afterwards, their textures will stand apart. You may even taste the difference.

But as far as choosing the ‘healthier’ salt, don’t bother. The trace minerals and impurities are so minor in your diet that they won’t really make a difference. Buy the cheapest, or the best suited to your purpose, or the one most likely to impress your friends and family. The rest is just marketing.

And remember: the only real way to know how much of something you are eating is to make it yourself. With fresh ingredients.