Farmer Incubator and Young Farmers Connect have just released a report entitled Regeneration – Growing New Farmers. The report discusses the challenges that new and young farmers face getting started as they attempt to farm regeneratively, address food and land justice, gain entry into the value chain and become viable. Read or download the report. (posted March 10 2021)

Did you know that Australians: 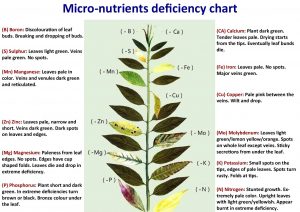 Micro-nutrients: The picture right is a useful summary of what leaves can look like when particular micro-nutrients are lacking. Plus it is A4 shape so you can print it off and stick it on your wall. Thanks to Greta Gillies for pointing out the original material. (posted January 2 2019) 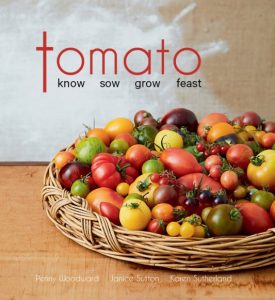 Tomato: know, sow, grow, feast is a new book about Australian heirloom tomatoes. One of its authors is newsletter reader Karen Sutherland, with the others being Penny Woodward and Janice Sutton. Here is what the back cover says: “Heirloom, organic, Australian. Karen leads you through organic heirloom tomato growing, from seed sowing to feeding, pruning and training. She outlines a variety of ways to grow, tells stories of some passionate growers, and helps you to keep problems at bay with an extensive illustrated pest and disease section. Penny chronicles the history of heirloom tomato varieties in Australia and explains how to breed your own heirloom tomatoes. She also details why tomatoes are so good for you, and why a red tomato is red! Finally Penny lists, and describes in detail, more than 220 different heirloom tomatoes that can be sourced in Australia today. Janice explores the enticing and diverse range of heirloom tomato flavours, describes in detail how to select, prepare and cook heirloom tomatoes, and explains how to create the perfect tomato passata and paste. Finally, she shares more than 60 delectable tomato recipes from renowned chefs from all over Australia.” Booktopia says: “What [sets the book apart] is the extensive list and descriptions of heirloom tomato pests and diseases, painstakingly researched by gardening expert Karen Sutherland, that includes an indispensable pest and disease chart to help gardeners identify and control them.” (posted September 19 2018)

Karen Sutherland has written in: “I thought you’d like to know that Booktopia and similar online sites discount books so much that authors usually (us included) make a loss for every book sold there. We self-published, and so are trying to encourage people to buy from us directly [here is the relevant page from Karen’s online shop] or from a supplier such as Bulleen Art & Garden, CERES or Bee Sustainable. I had no idea until I wrote this book, and often bought from these sites.” (posted September 19 2018)

Sustainable Gardening Australia have published a summary of the book. (posted December 5 2018)

Talking about people who have written books – here’s something that you don’t know (and probably don’t want to know): I (Guy Palmer) am an erstwhile book author and you can still buy some of my books online at Amazon. For example, my 2006 book on housing and my 2002 book on poverty & social exclusion. (posted September 19 2018)

Foodprint Melbourne has released a new report, Food for thought: Challenges and opportunities for farming in Melbourne’s foodbowl. (posted July 25 2018)

See a science experiment on soil erosion, which demonstrates the relationship between precipitation, soil erosion, protection of watercourses and vegetation. (posted November 29 2017)

I soon discovered National Chocolate Day (7th July), where I sadly missed all the events that happened in the CBD. I then discovered that, although World Vegan Day is on 23rd October this year in Melbourne, it is usually on the last Sunday of October and, in the rest of the world (including Adelaide), it is on 1st November (apparently to coincide with the Day of the Dead).

In any event (sic), to make sure that you can plan your celebratory events for next year, here are some of the ‘official food days’ that have at least some profile in Australia:

Note we have all just missed International Talk like a Pirate Day (19th September). Apparently, on that day one can choose ‘pirate’ as the language in a Google search! And it is a holiday for members of the Church of the Flying Spaghetti Monster (aka the Pastafarians) who, inter alia, assert that a decline in the number of pirates over the years is the cause of global warming. (posted October 5 2016)

Our Italian correspondent reports: the Slow Food movement was founded in Italy 30 years ago by Carlo Petrini in response to the arrival of McDonalds in Rome. It now manifests throughout Italy. ‘Terra Madre Mercati’ (Mother Earth Markets), of which there are now 55, mostly in Italy, are part of the movement. One of them takes place every Saturday morning in Umbertide. It is confined to growers and producers from within forty kilometres of the town. As well as fruit and vegetables, cheese, bread, cakes, jams, honey, olive oil and pottery are also available. Many of the participants are committed to totally organic produce, although this is not mandatory. One participant is a baker making bread with milled hemp seeds. Another is a fruit and veggie stall with connections to ‘Fondazione Amica Campagna’ (Foundation for the Countryside), a foundation that cooperates with participants from all branches of the food industry that support ideals such as seasonality, low food mileage, and a culture of conscious spending. (posted August 17 2016) 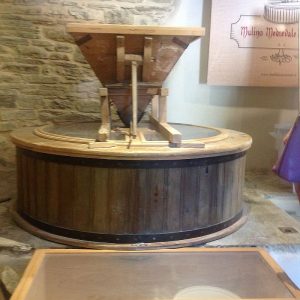 In Umbertide, there is a flour mill which dates back around 800 years. Its design is based on mills used in Greece and Turkey and was introduced to Italy in the Middle Ages when laws forbidding slavery were introduced and water-powered mills replaced those operated by slaves. The mill is still powered by water diverted from the local river and produces exclusively organic wholemeal flour from locally-grown heritage wheat varieties. Inter alia, they are milling heritage red romanino corn, whose flour is apparently the best for making polenta. (posted August 24 2016) 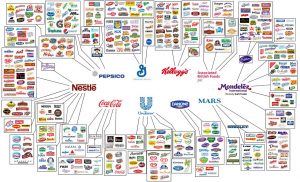 Our Canadian correspondent reports: I just wanted to tell you all about the fantastic waste management system here. It is the law that everyone sorts their garbage and places it in the correct bins. Random inspections are made and people are fined for incorrect sorting. Interestingly, every household is provided with a bench bin for food scraps and a larger outside bin to empty this in to. When collected, the food scraps are turned into compost and residents can pick this up free. There is also a recycle bin (with clear instructions of what materials can be recycled) and another bin for non recyclable/non compostable garbage. There does not seem to be a bin for garden waste. (posted July 20 2016) 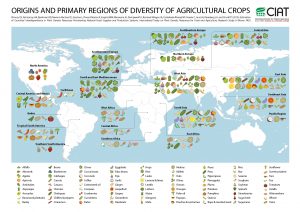 It comes from the Farmers’ Almanac Facebook. Here is their rationale:

I tried Googling to see whether others agreed with the rule. I found a number of sites in support (e.g. Cooking manager). I also found some that said one should always steam rather than boil (to lessen vitamin leaching), and a few that advocated adding things to the water (e.g. fat and citrus, as well as salt). (posted April 27 2016)

Recipes, definite and indefinite articles: something that has been bugging me for ages – why do recipes rarely contain the words “the” or “a” (at least until I get my hands on them)? Is it some sort of rule? Who decided? (posted April 27 2016)

‘Free range’ egg producers that you should avoid: as many of you will know, the state, territory and federal consumer affairs ministers met on 31st March and decided that ‘free-range’ can mean eggs produced by hens stocked at up to 10,000 birds per hectare, not the maximum 1,500 per hectare that the CSIRO Model Code recommends. Choice, who have been running a campaign on this issue, have put together a list of egg producers who you should avoid because, although they call themselves ‘free range’, their stocking densities are 10,000 birds per hectare: 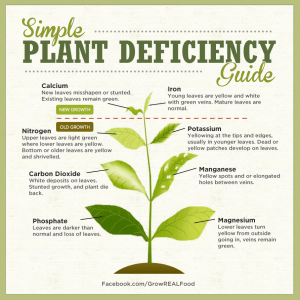 Another useful table and short article (pdf) on the same subject. (posted October 28 2015)

The long term costs of organic compared to intensive farming: an in-depth article which uses life cycle analysis on organically farmed tomatoes and pears, and intensively farmed wheat, apples and lettuce to show the overall impact of agricultural methods. Click here to read the full article or click here to read a one page introduction. (posted July 1 2015)

Genuine free range: Whereas some parts of the world (e.g. the European Union) regulate marketing standards for egg farming, and thus what can be described as ‘free range’, Australia does not. Rather, the theory in Australia is apparently “The producer is bound by consumer expectations and perceptions of what constitutes free range. Producers are generally thought to be bound to Model Codes of Practice of Animal Welfare: Domestic Poultry published by the CSIRO.” (see Wikipedia). 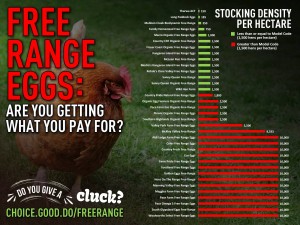 The (hardly unexpected!) problem is that, in practice, many producers do not feel themselves bound by the CSIRO code and the public is none the wiser. This is clear from the graphic (click it for a full size version): whereas the CSIRO code specifies an upper limit of 1,500 chickens per hectare, many of the major ‘free range’ egg producers have up to 10,000 chickens per hectare. To find out more about this issue, read CHOICE’s recent report or their
associated Facebook post
. Thanks to Wendy Moore for pointing out these links to me.

It may well be that proper regulation will be introduced in the new year (e.g. see recent news reported by the ABC). But in the meantime what can you do about the situation? The obvious solution is to buy your eggs from a producer who is actually certified against some actual, defined standards. There are two such standards: Free Range Farmers Association in Victoria (maximum 750 chickens per hectare) and Humane Choice (maximum 1,500 chickens per hectare). There are a total of 11 egg producers in Victoria who have one of these two certifications. And one of these – Top Hundred Acres from Yan Yean – is local to us and has several local outlets, including Eltham Farmers’ Market. The eggs of one other (Family Homestead Genuine Free Range Eggs) are apparently available from Coles. (posted June 17 2015) 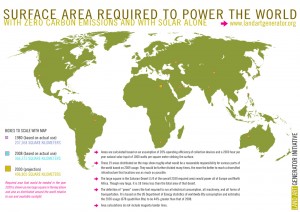 Not food, but interesting: I usually keep the material in this newsletter strictly to matters food. But this graphic by The Land Art Generator Initiative of the total surface area required to fuel the world with solar power is just too interesting to omit. The article in which the graphic was first shown is equally interesting. It is so refreshing to read analysis rather than polemic. (posted May 20 2015)

Reducing food loss and waste: A working paper, from The World Resources Institute (WRI) and the United Nations Environment Program (UNEP), shows that more than half of the food lost and wasted in Europe, the United States, Canada, and Australia occurs close to the fork, at the consumption stage. By contrast, in developing countries, about two-thirds of the food lost and wasted occurs close to the farm, after harvest and storage. (posted June 13 2013)