Robin Gale-Baker, from Sustainable Macleod tells you all you need to know about watering. This is one of a series of articles she has written about growing techniques (see right hand sidebar). She has also written a number of articles about growing vegetables and general fruit trees.

Imagine for a moment that you are parched with thirst. Would a teaspoon of water quench that thirst? Or a tablespoon? Or would you need at least a full glass? Chances are that it will be the latter and yet often we do not apply the same principle to plants – especially edible plants. Under-watering can be as detrimental as over-watering. A plant, like us, needs to be adequately hydrated to stay alive but also it needs to be hydrated so it can transport nutrients (particularly calcium) to the whole of its being, and to thrive sufficiently to produce the edible parts: leaves and stems, fruit and flowers, roots and seeds. Here are some tips on what to watch out for.

It is worth purchasing a good quality hose and trigger nozzle AND good quality tap attachments both for water efficiency – no leaks – and for being able to deliver water at the correct and appropriate strength. A nozzle with an extended arm and a head that can be adjusted up and down and a range of capacities such as stream, soak, shower, spray and mist is ideal. These settings are very useful as they fulfil different functions. For example using a fine spray on a punnet of seeds prevents the seeds being ‘shot’ out of the punnet but using this on a tray of 7cm tubes of well developed tomatoes would mean that the water lands only on the leaves and the soil in the pot does not receive adequate or sometimes any water. On the good quality nozzles, there will be an adjuster that fans from low water pressure to high pressure so you need also to adjust this to whatever you are watering. Some plants, such a basil, have quite fragile stems and these can be split or broken by pressure that is too high. The reason for having good quality tap attachments is that poor quality ones with good quality nozzles often leak especially if the nozzle can tolerate high water pressure and the fitting cannot.

Edible plants in pots and punnets

Remember: a hydrated plant is a healthy plant and will not scorch or wilt in hot weather! 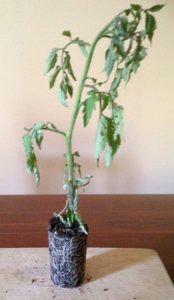 The left hand tomato is one I let dry out and wilt for the purposes of demonstrating the amount of water required to fully hydrate this plant. Dried out it weighed 182 grams. Just lifting it would indicate it needs water because it would be like lifting a feather. I gave it 50ml of water and one hour later it looked normal and weighed 210 grams. I then gave it another 100ml of water standing it in a bowl and it absorbed most of that in another hour, and weighed 266 grams. Finally I gave it another 50ml and most of that drained into the bowl but not before increasing its weight to 283 grams. So in essence watering the tomato increased its weight by 101 grams, and all this is water, and it absorbed approximately 160ml of water. This is the equivalent of just over 3/4 of a cup. Look at the colour of the roots in both pictures. The first one shows a mass of very white roots, evident because of the dryness of the potting mix while in the second, the soil is well hydrated and as a result the roots can barely be seen.

3 Responses to “The art of watering”