Megan Cassidy, from Greensborough, is active within Sustainable Greensborough. As discussed on her website, she is a freelance copywriter.

What is a food forest?

A food forest is a way to pack a lot of diversity into a small space, mimicking the layers of a true forest, so that it all works together to create a functioning and largely self-supporting ecosystem.

As illustrated in the diagram right (from Permaculture a beginner’s guide by Graham Burnett), there are 7 layers that are generally expected in a food forest, 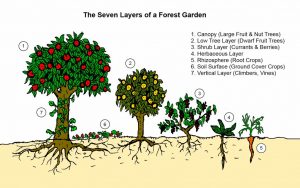 Each of these layers take up a different part of the ‘space’ available, which maximises the potential yields you can harvest. This is what Bill Mollison referred to as stacking in space. 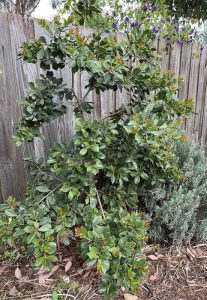 When designing your food forest, you need to think about including some fruit trees that are ready to harvest in autumn/winter, so that you have a crop after the main season of spring/summer has passed. Bill Mollison called this stacking in time – when you use varieties of food plants that will fruit/produce early or later than others, to extend your growing season.

The cherry guava is variously known as red cherry/strawberry/cattley guava. There is also a yellow variety.

The tree is evergreen, and can grow 3-6 metres, although it can be kept pruned to a more manageable shrub size. In principle, it can therefore occupy the understorey layer of your forest. Mid-green leaves with contrasting yellow veins, and an ability to grow in full sun or part shade, mean it can be used to create a hedge, a screen or a feature in your garden. New growth is a striking orange-red colour, which is makes for a pretty display. 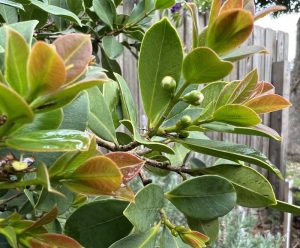 The cherry guava flowers in spring, but the fruit doesn’t ripen until April-June of the following year. The flowers are whiteish to light yellow, fluffy, and bunched close to the stem on new growth. You can sometimes get another flush of flowers in the colder months.

The fruit are small, round and sweet, ranging from 2-4cms across. They are also high in vitamin C, which comes in handy to keeps colds at bay when they ripen at the beginning of the cold weather!

The yellow fruit are slightly milder in flavour, bigger and are definitely my favourite.

The fruit can be eaten fresh, skin and all, including the tiny hard seeds. 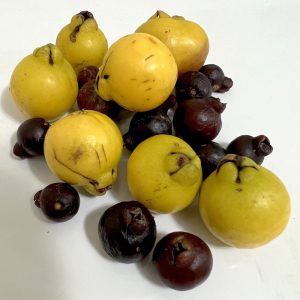 If you are lucky enough to have a surplus, you can stew or jam them, or turn them into a yummy syrup!

A word of warning

The tree can be weedy in warmer conditions, and is classified by the Queensland and New South Wales governments’ as an environmental weed. This is because the seeds are readily spread by birds into the rainforests, and they can row rapidly in those conditions, out-competing other native trees.

If you are down in cooler climates such as Victoria though, this tree is well worth checking out for its tasty fruit that comes on as the weather turns colder, and when little else is providing you with a sweet fruity harvest!