If you are looking for a versatile, useful and spectacular herbaceous perennial, then go no further than pineapple sage (Salvia elegans). With its whorls of scarlet, tubular flowers (4cm in length) and lime green foliage, this attractive shrub will flower, with careful cultivation, almost year round. It’s a ‘short day’ plant meaning that, as the nights grow longer, it flowers more prolifically.

Culinarily, the leaves have a pineapple fragrance but must be used fresh as cooking destroys the scent. The fragrance is released by rubbing the leaves between your fingers or chopping. Both leaves and flowers can be used in cold drinks, fruit salads, salads and as garnishes. Children and adults alike also love sucking the sweet nectar from the flowers! 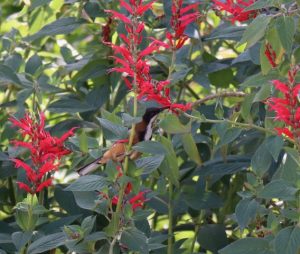 In a Melbourne climate, pineapple sage grows to a height and width of around 1.5 metres in fertile, well-drained soil. It provides a good habitat for butterflies and honeyeaters in autumn and winter, especially small thornbills such as the Eastern thornbill (see photo).

At the end of autumn, pineapple sage can look straggly and it benefits from a prune down to ground level. However, rather than prune it all at once, selectively prune out some stems including dead ones, and continue to do this as the stems renew and flower. This will provide winter sustenance for honeyeaters. If hit by frost, the foliage will be damaged but the roots will survive. A heavy prune is then necessary to remove all the dead and damaged leaves and stems.

To propagate pineapple sage, either divide the clumping roots, spade off a section, or take cuttings in spring. For the latter, select a firm, green stem with at least four nodes, remove any flowers and strip the stem leaving a pair of leaves at the top. Then, cut the stem on an angle directly beneath the lowest node, dunk into water, shake off, dip into hormone rooting powder, and insert into a mix of damp perlite and vermiculite. A perlite/vermiculite mix, which will drain well and have plenty of aeration and space for root development, will produce strong white roots within a week whereas placing the cuttings in soil will produce weak, straggly roots. Make sure that the mix remains moist.

Pineapple sage likes to be well watered. It is useful as an indicator that the garden soil is drying out. It will, along with tansy, wilt well before other plants as the moisture content drops, signalling the need of the whole garden for water.