In July 2020, Judy Vizzari visited the garden of Chloe Thomson, from Hurstbridge. As well as being an avid gardener, Chloe’s Facebook page is Bean there dug that.

“To plant a garden is to believe in tomorrow.” (Chloe Thomson quoting Audrey Hepburn) 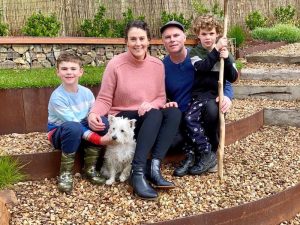 “The driveway is scary steep, but you can turn at the top and do not stop halfway up the drive or you’ll need to reverse back! Swing left at the top to pull in front of the garage. This will all make sense when you are here!” That’s the advice Chloe Thomson gives me prior to my recent visit to her property on the outskirts of Hurstbridge.

I wonder how challenging this garden visit might be and come with breath baited, expecting Everest.

Hurstbridge is a vintage town. It’s placed on the north-eastern perimeter of suburban Melbourne and is serviced by the 37-kilometre-long Hurstbridge railway-line, which was completed in 1912. Today, the village is a quaint collection of turn-of-the-century buildings once occupied by farriers, grain merchants and farm suppliers – visitors will see that some premises still bear their original signage. In the mid-20th century, a wave of newcomers introduced earthy ‘Eltham’ builds and today the area retains a slightly rough-hewn and alternative face and boasts a range of trendy eateries.

The Diamond Creek passes through the back of the town. It’s spanned by a wooden bridge (just one of Nillumbik’s many aged, single lane bridges) and, once over it, travellers suddenly find themselves negotiating country roads hedged by steep hills. It’s picturesque, but not, at first glance, a gardener’s dream. Driving through it, I see clay brown earth punctuated with rocky outcrops of shale, grey-green eucalypts, bushy scrub and wiry grasses, all of which suggest that this place will challenge the most committed of gardeners.

Chloe lives halfway up one of those hills. Her property is easy enough to find but I hesitate at the bottom of the long sloping driveway which seems to me to mimic a testing portion of one of the stages in Le Tour, the annual French cycling challenge. But the only way is up so here goes! Surprisingly easy. As instructed, I pull left at the top and before I’m fully out of my car Chloe has come down a staircase to welcoming me. She’s a young mum, a tall and attractive woman with a big smile and natural warmth. She looks quite athletic and I wonder how much gardening has contributed to her fitness.

We decide to commence the visit with a garden tour and so, as Julie Andrews might have said, we start “at the very beginning“.

The family of four, Chloe, her husband and their two boys, moved into the 1980s home six years ago. She says that “there were only a few native trees planted in the garden back then“. I wonder whether the former owners were exhausted by the excavations needed to provide a flat space for their home on the 1,000 square metre sloping block or whether they were so taken by their lovely views of the creek and valley that they didn’t have time for gardening. The front of the house faces north east and looks out over treetops, occasional roof lines and natural bushland.

We walk halfway down the driveway. There, Chloe points out an area which her boys delight in sharing with neighbouring children. It’s mountain goat country and not an area for the faint-hearted but a perfect place for adventurous six and eight-year-olds. 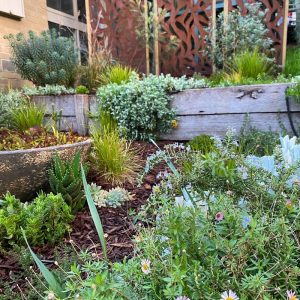 Next we check out a recent success. Almost at the top of the drive is an area which had resisted all landscaping attempts – it’s a sloping wall of rock and clay which was cut out during construction of the driveway. Chloe found that mulch washed straight off it and plant roots could find no purchase there. Eventually she hit on a scheme to clothe it with rusted metal sheets which could be bent to a rounded shape and pounded into the wall to form attractively weathered plant holders. Three narrow rectangle sheets were, curved, fitted into the hill then filled with compost and garden soil and planted out with arthropodiums. The result? Perfect, the plants thrived and the slope dressed, the project was so successful that now more triangles are to further enhance that straight curve.

We turn our attention to the front of the house, which is high above drive level. In fact, it boasts a similarity to traditional Queenslander builds – a wide, central staircase leading up to a full verandah and front door. Below the verandah, there’s a drive-in garage on the left of the staircase and, extending outwards, a garden on the right. Here again the slope dictates landscaping choices as the garden bed is almost flush with the verandah and very exposed to its 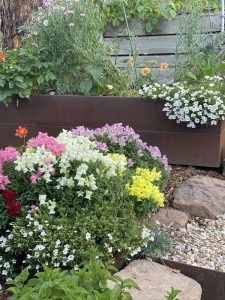 northerly aspect whilst on the left the land drops down sharply to drive level and garage access.

Below the staircase Chloe has developed a “secret garden” which blends both exposed and protected environments. There’s a pond and, towards the back of the area, a fernery where the plants include bird’s nest ferns, asparagus ferns, spider plants, clivias and lomandras. Ground covers inhabit the transitional space either side of the water feature and, at the front of the pond and edging onto the driveway, is a collection of silver-grey succulents and hardier plants, including cushion bush and even some thyme. They thrive in full morning and early afternoon sunlight. Fish inhabit the pond (and control the mosquitos) whilst the sound of burbling, babbling water is pleasing. The home’s sub-level brick foundation wall serves to enclose this space and provides a hanging bay for dichondra and zygocactus.

It’s here that I learn that Chloe has an interest in recycling. She collects a variety of discarded household items, such as bed frames, from various sources and incorporates them into her garden in a functional way, like the metal bed base which has been fixed to the brick wall and 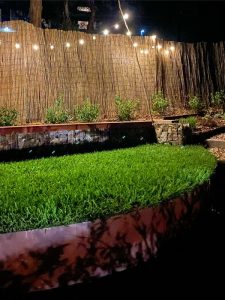 serves to support climbing and falling plants; a backdrop to her garden feature.

And so we venture around the side of the house, passing a succulent garden and the boys’ cubby house. There are three compost bins here, barely visible behind more rusted metal screens and trees but close to the back door. We continue towards the vegetable garden with a view to further up where the “pleasure garden” sits before the high back boundary fence.

There are few flat spots here, instead, there’s a series of seven steps (faithfully measured out by Chloe’s dad) and spaced to enable comfortable climbing. They’ve been hewn out of the hill, secured with more rusted metal sheets and edged with heavy rocks (one rock at each end of each step). Chloe tells me that that work was all manual – there’s no access for heavy equipment here so they devised a method of carrying the rocks in a sling between two poles. She says that they based their method on an ancient Egyptian technique – it must have been quite a workout for the family. 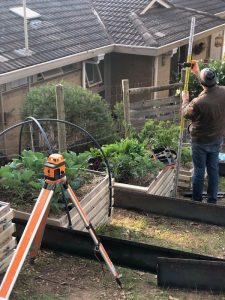 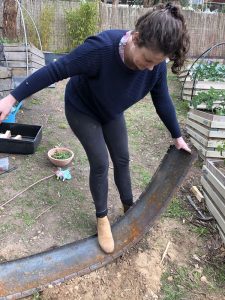 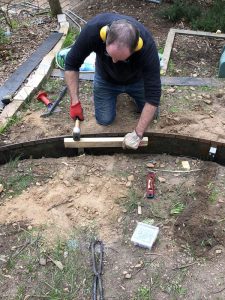 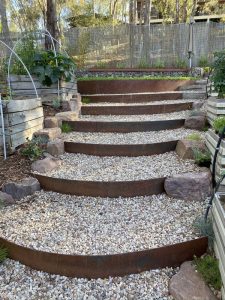 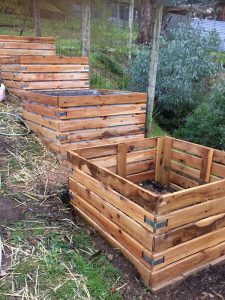 Either side of the steps are a series of wooden vegetable boxes roughly half a metre high and each a metre square. They’re exposed to all day sun and filled with combination garden soil and compost and serviced by a mains water irrigation system. Some contain flowers and herbs whilst others support  vegetables such as broccoli, Chinese greens, cabbages, carrots and two varieties of peas (which are just commencing their journey upwards to clothe a wire arch extending from one box to another – they’ll be pretty in springtime).

The vegetables are all far more advanced than my own and I wonder whether the open position contributes to their vigour. There are, Chloe tells me, enough vegetables here to keep the family in greens year round and, she adds with a rueful smile, her basket “must look very unhealthy” when she’s shopping for vegetables as she rarely includes leafy varieties amongst her purchases.

At the very top of the steps, a flattened area has been created, grassed and complemented with a long seat built into its back edge. There are some tall trees here and solar lights span the space, 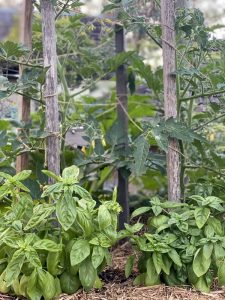 it’s a spectacular outdoor entertainment area with an expansive view over the house to the valley below – how beautiful on a warm summer evening. It’s in this area that the family and adjoining property owners enjoy neighbourly conversations across a moveable fireplace – a pastime which is especially pertinent during Covid-19 isolation … concurrent social distancing and contact “over the fence“.

Tall gums punctuate the scene and, off to the right, is a path through plantings of native grasses and low growing shrubs and ground covers. The path leads to a clothes line which is barely visible but functional save the fact that a full basket of wet clothes carried up there would be, for me, a challenging task. Obviously not so for Chloe and her husband.

Excavations into solid rock were made when the house was built and below this high plateau is a sheer drop to a protected garden. It’s here that dahlias, now dormant and camellias, soon to flower all wait at the back of the house for spring. Raspberry canes are planted on the edge of the ridge above and will tumble down during summer months – they’re a popular source of fruit for the boys and, 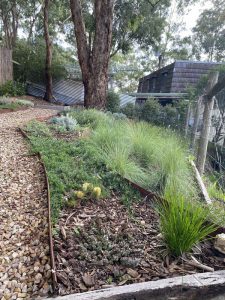 Chloe says, those berries rarely come inside as they’re eaten in situ as soon as they ripen.

So, here we have a beautiful space which attests to the possibilities that challenging environments can offer. I have seen the results of Chloe’s gardening skill and enthusiasm too, but previously have heard that she’s an accomplished media personality too, I’d like to know more.

Chloe is something of a celebrity

Since March this year, Chloe has presented a series of Staying Grounded gardening podcasts for Bunnings.

Add to that her podcast interviews with well-known television personalities including Paul West and admired mentor Jane Edmanson, plus her written work (interviews) and you’ll see that hers is a successful and well-rounded journey. 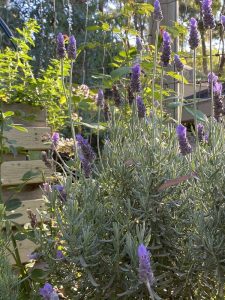 So how did this career take off? Chloe says she’s always been an outdoor girl. As a child she was well travelled and enjoyed her parents’ hobby farm. After completing secondary schooling she studied Agricultural Science and Horticulture at the University of Melbourne and then, after graduating, she spent several years working within the horticultural industry until, by chance, she fell upon her perfect pastime – work that combined her love of science and horticulture with flexibility, fun and a fair slice of challenge.

From what I can see, she appears to be handling family and career well and seems to inject into daily life the enthusiasm and fun that is portrayed in the Gardenette YouTube segments.

Finally, there’s something Chloe would like to stress – her gardening approach: “I tackle little areas; I divide them up and tackle them one by one“.

Her method is to observe each space over a period so that, when she does 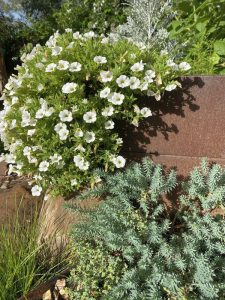 commence a project, she knows its constraints. She acknowledges that working on difficult sites is challenging but repeats, work with “small pieces“, take time to learn about them, plan and then to embark on those tasks and don’t expect to complete a garden all at once – to garden is to grow and that takes time – take “small bites“, she says.

It has been a pleasure talking with Chloe but my (interview) time is up and I’m guessing her afternoon schedule is full. All that’s left is to thank her and to negotiate the downwards stretch of driveway and to make the return journey. I leave with the satisfaction of having spent a lovely morning in the company of an expert and friendly young gardener who talks enthusiastically about her life and her love of gardening.

As a final bonus, here is a video that Chloe recently made about her garden.