Each month, an unusual food-related word is added to this page.

‘Crapulence’, meaning becoming sick because of gluttony (i.e. you have eaten or drunk too much).

‘Groak’, meaning to stare silently at someone in the hope that they give you some of their food. This is something that my dog does whenever I am either eating or in the kitchen.

‘La de la verguenza’, meaning the last morsel of food on a serving plate that everyone is too embarrassed to reach out for. The literal meaning of the phrase in Spanish is ‘the one of shame’.

‘Mageiricophobia’, meaning fear of cooking. According to Wikipedia, it can be related to any or all of fear of spreading illness, fear of the cooking process, fear of recipes, fear of food knowledge or fear of food intake.

‘Molotov cocktail’, meaning any homemade, bottle-based incendiary weapon. In the Winter War between the Soviet Union and Finland (1939-1940), the Soviet foreign minister Vyacheslav Molotov declared that their bombing missions over Finland were actually airborne humanitarian food deliveries for their starving neighbours. As a result, the Finns sarcastically dubbed the bombs ‘Molotov bread baskets’. When they developed a hand-held bottle firebomb to attack Soviet tanks, the Finns called it the ‘Molotov cocktail’, as “a drink to go with his food parcels”. Read more.

‘Oomancy’, meaning the art of telling the future through the observation of eggs, especially the shapes formed when the separated whites from an egg are dropped into hot water.

‘Plirding’, meaning to pick up litter whilst bird watching.

Watch this 60 minute webinar on the subject by Julia Cirillo, from Merri Creek Management Committee.

‘Tyromancy’, meaning the art of telling the future through the observation of cheese, especially as it coagulates. Types of emerging mould and patterns of growing holes are apparently both important aspects.

A variant is to write the names of possible suitors or suitresses onto pieces of cheese and then place these pieces around a mouse. Whatever name is on the piece of cheese that the mouse eats first is then destined to be your love mate. [Editor: I am currently running an experiment to see if this works in practice using three pieces of cheese with the names Jennifer Lawrence, Taylor Swift and Kate Upton on them.] 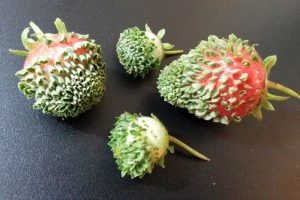 ‘Vivipary’, meaning the phenomenon whereby seeds germinate while they are still inside, or attached to, the parent plant or fruit. Whilst it occurs as a matter of course in a few (but only a few) plants, in most plants it is usually the result of a hormone imbalance. The picture shows some viviparous strawberries.

‘Yule-hole’, meaning the last hole on a waist belt; in other words, the hole you have to move your belt buckle to after you’ve eaten Christmas dinner. It is apparently a Scottish word.