Judy Vizzari visits the garden of Vicky Shukuroglou, from Eltham. 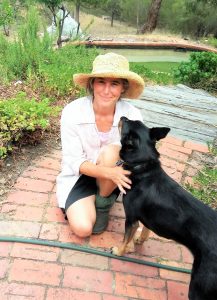 Today is a special day. Not because the temperature gauge is measuring high 30s – we’ve had lots of heat lately – or because Eltham has become frighteningly tinder dry, but because I’m meeting Vicky Shukuroglou, a young woman I’ve been hoping to visit for some time now. Vicky is busy – she’s an artist on the move so I’m feeling lucky to finally catch up with her.

I approach her home along a dusty, winding road. She lives in south Eltham on a 10 acre property close to Warrandyte State Park. As I navigate each turn, I have a real sense of departure from the township I’ve left behind.

Access to the house is via a rough road which leads to a parking area and it’s there that I meet her, a slender young woman sensibly attired in a straw hat and loose white shirt over shorts. I note that she wears far more practical shoes than me. Her eyes are steady and her smile welcoming. She’s accompanied by another important member of this greeting committee – Queenie, her friendly black dog. Queenie also seems to be keen to explore Vicky’s garden. 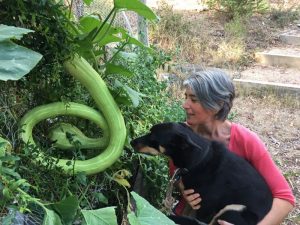 After a quick glass of water, we stand on a little plateau which is shaded by high eucalypts – it forms a versatile space at the back of the house for both leisure and gardening and is packed with beds and pots containing an interesting blend of indigenous edible plants and decorative species. I’m impressed by a thriving native hibiscus which stands head high. Its fine foliage creates a vivid-green mist punctuated by delicate mauve blooms – Vicky tells me that it was her grandmother’s favourite plant.

Vicky is a gardener with an obvious love of plants and expertise in food production but this garden isn’t just about produce or pretty spaces – it’s clear that Vicky has a deep love of her environment. 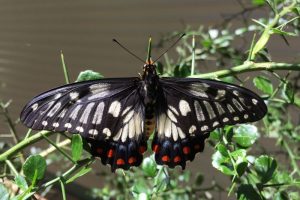 “For me, gardening is about biodiversity – my number one priority is to maintain habitat.”

Hers is a holistic approach – it’s evidenced in the way that she cares for land and its inhabitants, in the work that she devotes to returning her land to its natural state and in her efforts to maintain, not only its vegetation, but also the life it supports. She discusses how, during the 30 years that her family has lived there, she has slowly and carefully removed blackberries, thistles and a multitude of other introduced weeds and then sourced, cultivated and planted indigenous species to re-vegetate the area.

“To look at it now you wouldn’t know, but so much time has gone into eradicating weeds“, she says. She’s particularly proud of a patch of native orchids that have recently emerged and of the lush growth which now exists around the Laughing Waters Creek at the far end of their property.

I gaze out at an area of tranquil, forested bushland and mentally tick off an absence of obviously introduced plants.

The flow-on effect, Vicky continues, of tending the land is supporting wildlife – indigenous animals (kangaroos, wallabies, phascogales, gliders, wombats, echidnas, rodents, snakes and birds) all share this space, as well as the introduced species (foxes, rabbits and deer) and then there are the subterranean dwellers (frogs and worms and a multitude of spiders, ants, moths, butterflies and other insects).

She tells me that at times the “trees are buzzing with wrens, thornbills and pardalotes” and, as we walk amongst the garden beds, she warns me that she has seen brown, tiger and copper head snakes near her well-watered vegetable beds and that I should watch out, especially around the logs which have been left as habitats for the frogs. She adds that those snakes have never been threatening.

So Vicky is trying to balance natural bushland with cultivation but her convictions come at a cost. Her cropping plants are constantly in demand from the many appetites primed to consume them. It seems that Vicky maintains a generous will to share her environment with all living creatures, even when she finds her fruiting trees bare, her herbs ravaged and her zucchini and tomatoes dented by sharp teeth.

Vicky’s objectives sound similar to those of nearby Yarra Valley Parklands, which extend along the Yarra River: “[Yarra Valley Parklands] form a significant ‘backbone’ of interconnecting trails, linear parks, wetlands and waterways throughout the metropolitan area. The ongoing effort revegetating the parklands, mostly with the aid of valued community groups planting about 30,000 trees per year, has seen the return of a number of significant wildlife species.” Parks Victoria 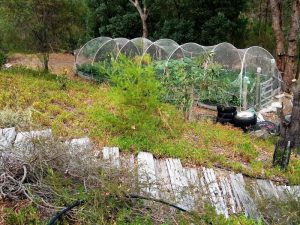 This house is set in bushland and the ground appears hard and dry, but there is a wealth of plants thriving below this plateau. Vicky has had to cope with competition from climate, fauna and flora (especially eucalypt roots) and, despite her challenges, she has achieved impressive results.

We make our way down to a terraced area sporting a tent-like structure – a raised vegetable garden perhaps eight metres long and three wide, with a central pathway down its length. It’s enclosed with low metal walls from an old shed and the entire garden is covered by netting stretched over pipe arches. Its two long beds are filled with compost enriched soil and, owing to the importance of keeping nutrients on site, all weeds and pruned plants are included in that compost. The tent’s interior is watered through hoses which lead comes from a nearby 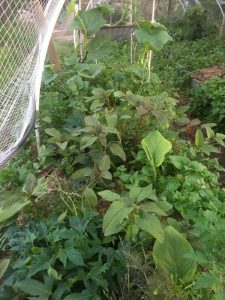 swimming pool which has been converted into a rainwater reservoir and which is home to many frogs and aquatic plants.

Inside the ‘tent’, there are many thriving vegetables including tromboncino, Warragul greens, amaranth, turmeric, ginger, all sorts of leafy greens, sweet potatoes, cucumbers, tomatoes and eggplants.

A highlight of the collection is a fascinating plant called ‘murnong.’ It’s an indigenous perennial tuber which is also called a yam daisy. Vicky tells me that there are several varieties and that she is cultivating three of them. The one we’re examining presents a fine and delicate matt of twisted stems which occasionally end with hook-like ends bearing pointed oval shaped buds. When in flower, Vicky says, these plants display a mass of yellow blooms similar to dandelions – very pretty – and the native bees love them.

I learn that murnongs have edible, tuberous roots which were once an important food source for Indigenous communities. However, the introduction of sheep and cattle had a very negative effect on their survival and they were almost completely eradicated – only now is an effort being made to re-grow these nutritious and attractive plants. Vicky’s batch are thriving and, whilst some are destined for culinary use, others will be returned to the natural bushland.

From here, we wander down to another level where we find more zucchini and greens, and another variety of murnongs – these are larger, with heavier stems and stronger habit. These plants are also watered from Vicky’s swimming pool reservoir and the soil is always moist – it’s become a favourite camping ground for reservoir frogs where Vicky provides temporary accommodation – the fallen timber which lays close by.

Back up the slope, we see an array of fruiting plants including midgen berry (Austromyrtus), appleberry (Billardiera scandens), blueberries, nectarines, peaches, plums, figs, pomegranates and an apricot. Also, finger limes, Monstera deliciosa and kafir limes. Plus herbs which are grown from seed and grow in a narrow space on the northern side of the house.

I ask Vicky about NEAG – Nillumbik Environment Action Group – of which she is a leading member. I’ve visited their Facebook page and learnt that it is “a group that started life in 2015 as a response to bipartisan government inaction on the environment and climate change“. They have a small core membership, with a newsletter distribution of several hundred, and aim to raise awareness of climate change, to support people in caring for their environment, and to actively address local, state and federal environmental issues. NEAG promotes their organisation by providing film nights and via festival stalls, and they offer reciprocal gardening sessions to community members. This is just one of several local groups which are committed to preserving and nurturing our local environment.

The afternoon sun is telling and it’s time for me to return home. Queenie has come out from inside the house to say goodbye and I take the opportunity to photograph the pair together against a backdrop of trees and the reservoir. I’ve enjoyed this wander through blended bushland and food producing space and will remember it as a place for all seasons and a haven for all creatures.