Judy Vizzari visits the garden of Virginia Solomon, from Research. Virginia is the current Chair of Permaculture Australia and maintains a website called eco-resilience. 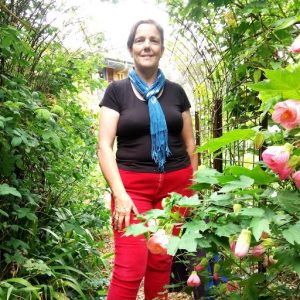 From the moment I pull up outside Virginia’s property east of Main Road in Research, I know that I am in for a treat.

What do I see? An extensive garden of colourful flowers, shrubs, flourishing herbs and thriving Australian indigenous plants. They line twisting walkways, flock expansive flower-beds and cling to garden walls. I see espaliered apples and twisting wisteria vines draped over metal archways. There are some complete show-offs too – heavily laden bushes, one supporting massed fragrant roses and another clothed in large magenta leaves and adorned with fairy floss puff balls. Above is a high canopy of indigenous and exotic trees. There’s a house here too, but I can only glimpse fragments of its rendered clay coloured walls and bright blue trims.

From the crunch of my first footfall on the pebble driveway I feel I’m entering a mysterious time zone – equally decades past and future. 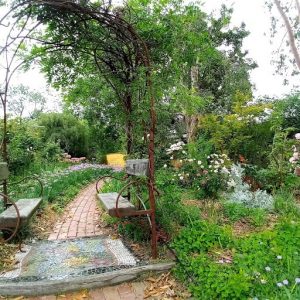 I follow a path into the home’s eastern garden – an area dominated by two enormous pin-oaks. I can now see the house, a flat-rooved stucco building serviced by a wide, curving verandah which is overhung, in part, by a rustic pergola. The deck appears to connect and access a series of private rooms I ring the doorbell.

I have a theory that gardens reflect their owners. This garden, as I said earlier, seems complex, even mysterious, but it is also confident and colourful. So when Virginia’s smiling face appears the parallel is obvious. Her hair is short and dark, her eyes bright and her blood-red jeans and black tea-shirt suggest that she, like her garden, is energetic and practical. I’m bustled into a country kitchen and introduced to a group of guests who, I learn, are permaculture experts. A brief “hello” and we’re off on our journey – back again in the eastern garden.

The house … “a receptacle to put people in” 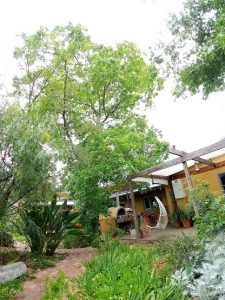 First, Virginia gives me some background on the house, which I learn has grown like topsy over the 26 years since 1992 when she and her husband, Stephen, came to live here. Then it was a three bedroom farmhouse but has since been extended to include “the Paris End” – formerly a parents’ apartment but now an Air B’n’B space. On a lower level, are bedrooms which are used by a boarder and ‘WWOOFers’ who swap their labour for “meals, accommodation and culture“.

The irregular block is around two-thirds of an acre, kite shaped and with a variety of large trees which offer some challenges in the form of access to sunlight. Long ago, Virginia says, it was a cattle farm and it’s resulting richly fertile soil is now “the most fertile in Eltham and surrounds!“

“I love exotics, I love all plants”

We stand in the eastern ornamental garden which is dominated by two grand pin-oaks which capture morning sun, offer shade and add striking structure to the space. I’m momentarily arrested by a large (metal) red-back spider who guards its iron web and is forever suspended from an oak’s branch. It is a permanent reminder that gardens are shared with many residents.

Virginia tells me that they “love the pin-oaks” and I can see why, they are very much at home in this ‘Alice in Wonderland’ garden. She adds that, during our travels, we will encounter several Bhutan cypresses on the western border which are equally large, but they are oversized light thieves and are “to big to remove“. It seems that their contribution is to serve as examples of garden planning gone awry!

Water all year round 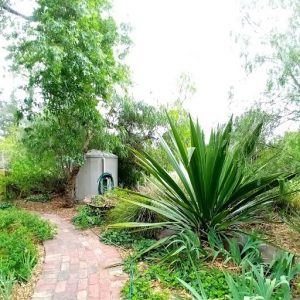 We move on to the northern garden. Just through the wall divider we pass a water tank and pumping equipment which, Virginia explains, is connected to a 25,000 litre above-ground water tank installed at the bottom of the block. It collects rainwater from the house and overflow from the basement tank and services all the gardens around the house.

“All part of the management of the property“

I’ve noticed that all the garden beds are heavily mulched and I wonder where the mulch comes from. This gives rise to a discussion on different types of mulch for different crops and its place in the general maintenance of the property.

I hear about periodic lopping of larger trees and bushes and how this cycle of cutting to rejuvenate plants and provide light in the understories in turn feeds those plants and encourages growth. “We have a very good arborist who advises us“, Virginia says. We inspect a Queensland box which has recently been lopped to open up its canopy. 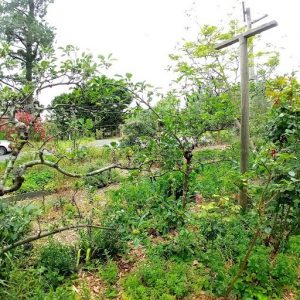 In this northern garden, there are espaliered apples, an olive, a hazelnut, a quince and citrus trees which provide cuttings for mulching. The mulch, in turn, contains fire inhibiting moisture and feeds the soil. There’s much food here for the mulching machine as well as the kitchen.

“I’ve made every mistake in the book!“

We look at the row of espaliered apples and Virginia points out that by grafting the apples ‘willy-nilly’ she inadvertently introduced mosaic virus to them and warns against enthusiasm without forethought. Further, grafting vigorous apple varieties like Granny Smiths above less heavy producers and tip bearers on lower branches led to those weaker varieties being overshadowed. She’s learned to group differing species of similar fruit maturation on the same root stock to limit the period that each tree is netted. But its too late to start again!

Next we explore Zones 1 and 2, the lower zones of the property 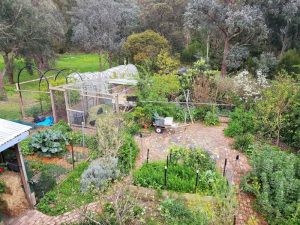 side of the garden.

Zone 1 is closest to the kitchen and contains a blend of perennial food producers – amongst them artichokes, asparagus, rhubarb, fruit trees and herbs, blended with annuals including tomatoes, beans, peas and lettuces. The mixed beds are crowded and colourful – a fresh and ready larder. “I encourage lots of flowering to happen“, Virginia says.

Onto Zone 2 and I’m immediately impressed by a huge plot of raspberries, almost as tall as me and laden with fruit. It seems they were heavily harvested the day before but I still see masses of pink berries adorning the verdant branches.

There’s a flourishing line of canna lilies nearby. They’re planted atop a swale 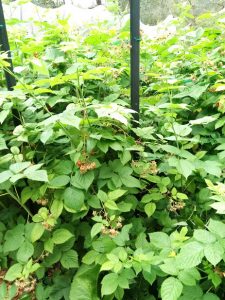 leading yet lower down the property to where more fruit trees are planted. It’s one of three swales in this area, all tending recycled water to feed the fruit trees and raspberry patch. There seems to be nothing that goes to waste here!

In the lower reaches is a compost bin which converts leaf mulch and manure produced by Virginia’s four beautiful chickens – Agatha, Agnes, Arabella and Callaghan. They are housed in an airy coop and have access to different spaces via runs which are managed by a series of doors. They’re active workers, as are the bees which thrive in three hives placed in a covered orchard which extends along the southern fence. These busy bees have a clear flight path to the raspberry patch and, like the chickens, contribute to the health of their environment while providing valuable food.

So much happens in this space

There’s much in this place to enjoy. So many methods are employed to maximise natural resources like water collection and purification, sun saving techniques and energy production, recycling of waste and re-using of materials (Virginia’s garden shed and work space are packed with rolls of chicken 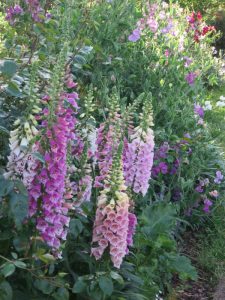 It seems to me that not a moment is wasted in this world. That’s not to say that every minute is spent in the garden; rather, I suspect that many minutes are spent enjoying the environment that the family have created. This family home appears to be one where both people and plants thrive.

I leave Virginia with some pots of society garlic plants. Through my in-depth look at this beautiful garden, I’ve gained some insight into what can be achieved in a suburban location and am inspired to work harder in my own suburban block.

And have I decided what mysterious time zone this property belongs to? It seems that now is the best place to be so now it is. You might, one day, be able to find out for yourself as Virginia occasionally opens her garden to the public.