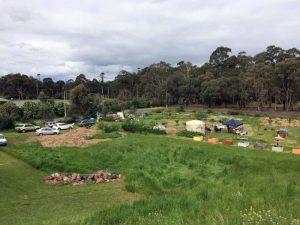 This garden is membership-based. Membership is $20 annually for a whole family or $10 for a single person.

To discuss any aspect of the community garden, contact Peter by phone (0422 199511) or email. Or go to their Facebook page. Or sign up for their newsletter.

At 31 Watkins Street, Diamond Creek (down behind the netball courts). It is a 1 acre block that has long been vacant due to the fact that it lies in a flood plain. While there is always the risk of further flooding, the soil is rich and ideal for growing.

Public interest in using the land for a community garden started around 2008, and gradually grew until plans were 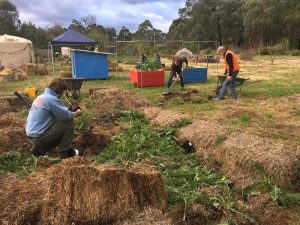 lodged with the council and Melbourne Water around 2012. Permission was granted, and actual work therefore started, in 2014.

The first year was spent setting up beds and digging in fertilisers. A corridor of natives was planted along the roadside edges and 30 varied fruit trees were planted. Unfortunately, only a week or two later, all the fruit trees were vandalised and destroyed. However they were lucky enough to have replacements donated by Bulleen Art and Garden and Bunnings.

The initial planning permit is for the lower half of the block so that is where they have planted up the beds and trees. Signage has been installed, as well as a sealed cross over onto the block, and finally a 22,000 litre water tank and 3 x 1000 litre tanks. The large water tank eventually became a victim of the local spate of graffiti with a cartoon of 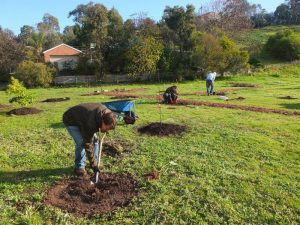 Bart Simpson mooning and the quote, “Eat my shorts!”. This has been painted over and further plans are in hand to discourage this type of graffiti.

In 2016, all the 11 wicking crates from a small Gipson Street garden were moved to the Thrive community garden, along with all the fruit trees, berries, compost bins and shed. They also received a grant from the Bendigo Bank to create an arbor along the main path, for climbing vines such as grapes and passionfruit and provide shade for the gardeners when eating their lunches during summer months.

As of Spring 2016, there were garlic, leeks, celery, silver beet and rainbow chard, snow peas, broad beans and various herbs, all doing well. There are also several large berry beds – 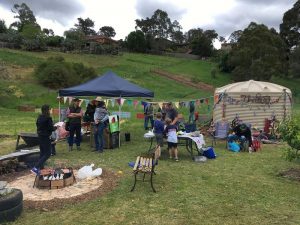 boysenberries, raspberries and strawberries, along with gooseberries, black and red currants. Lavenders and calendulas, along with a wild flower bed, have been planted to attract bees and add more colour.

There is someone working at the community garden every Saturday afternoon between 1pm and 3pm, and there is a food swap on the 3rd Saturday of each month between 2pm and 3pm. Everyone is welcome to come down and help out, and to take some of the crops that are growing there. It is a garden for all residents of Diamond Creek.

Community gardens in City of Yarra