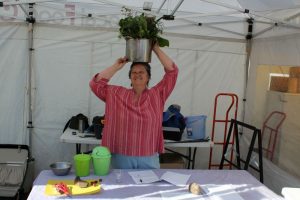 Marina Bistrin is an avid gardener. In 2017, she gave a presentation on ‘extreme composting’ at Eltham Farmers’ Market. Here are her notes (updated in 2022).

If you have the time and space at your place to compost the contents of your green bin, it’s a great thing to do. You can compost everything, from the easiest to the most difficult weeds, and even logs, in hugel mounds. You can make a nutrient-dense compost, especially if you include the weeds which are nutritionally dense. Many of these weeds are ancestors of our vegetables, but breeding bigger and blander vegetables has diluted the nutritional content of them. Many weeds are part of traditional diets, part of herbal medicine, and some are classed as tonics because they have so much nutrition in them (minerals and more complex compounds).

Composting your green bin contents lessens the work that your Council has to do with picking up green waste that then needs to be transported to sites in the countryside where they are composted and make biogas. The compost that you buy back from these companies often includes a high proportion of woody waste in the mix, which results in a high carbon but less nutritionally dense compost. Finally, dealing with your weeds can be fun and a great children’s activity (I think squashing with rocks is especially enjoyable!).

Why do weeds make such good compost and fertiliser? Weeds have a lot of leafy matter full of minerals. Also many deep-rooted weeds mine minerals from deep in the soil that your veggie plant roots can’t reach and bring them up to the surface via the leaves.

The difficulty with composting weeds and prunings is that some can re-grow in your compost and therefore need to be treated differently. That’s why I invite you to sort your common weeds into your best (easy to compost) and worst (difficult to compost) weeds and decide which you can hold onto to add to your compost and which you feel are better going into your council green waste bin. If you have the time and energy, plus the space on your land, you may want to compost absolutely everything, or at least try it once as an experiment. The easy to compost weeds can often just be dropped onto your garden and left there to break down, without risk of re-growing. It looks a bit messy, but that’s your choice to make. They become a sort of mulch.

I have been mostly composting in plastic cylindrical compost bins with lids, which keep the moisture and heat in but don’t produce the high temperatures necessary to kill seeds and pathogens and grasses like kikuyu / couch. I have also been making compost paths within the garden, but I don’t include food waste in these; rather I use prunings, grass clippings, wood chips, sawdust, coffee grounds, etc. I have also made compost on concrete paths surrounding the house to cool the house too. That creates an insulating layer to stop the concrete getting too hot. If you wanted to, you could grow a ground cover on this to cool the house even further.

Here are the methods I have used to deal with weeds before composting. You may want to use a combination of methods for different parts of the plants e.g. treating leaves and roots separately.

Problematic plant parts – treatments before adding to your compost

It’s useful to think of the plant according to its different parts as some are much easier to compost than others.

A trailer for Farming With Nature: permaculture, including Hugelkultur, on a mountainside in Austria with Sepp Holzer – an interesting synopsis of his methods with beautiful visuals of his farm.

Nillumbik Council allow food and meat scraps in their bins, wrapped in newspaper – they go to the Veolia facility.