Mitcham Community Meal provides a free community dinner every Sunday at 18 Edward Street, Mitcham, starting at 5.30pm. “Each Sunday night, a different local club, business, or church group provides and serves a meal to people in the Mitcham community“. Since they started in October 2018, that’s around 100 different teams who have prepared and served a meal (see a pictorial gallery of these teams). The organiser is someone called Ben Frawley (email Ben). In August 2022, Ann Stanley went for a meal and to interview Ben. Here is her article from the visit. 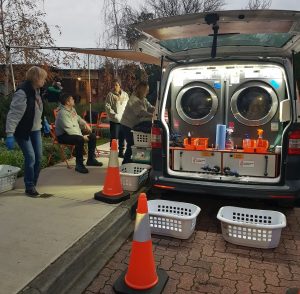 It was freezing cold on the Sunday afternoon that I visited the Mitcham Community Meal. Outside the hall some people stood around an orange van rugged up in coats, scarves, and beanies. The van was rigged out as a small laundry*, with a washing machine and a dryer.

Inside, the hall was bright and starting to warm up. Many guests were already seated at tables set with cutlery and napkins and there was a delicious smell of Sunday dinner in the ovens. Behind the kitchen counter, this week’s volunteers – three generations of one family – were getting ready to serve trays of shepherd’s pie.

One of the reasons all this started is that Ben and his wife Jane noticed a few homeless people regularly hanging out in the local mall. Their dilemma was whether to give them money and hope that it didn’t go towards cigarettes and alcohol, or to turn a blind eye, do nothing, and just keep walking. Neither option seemed morally right. The solution was to offer them a hot meal and a place to sit inside for warmth and a chat. As a result, Ben and Jane started Mitcham Community Meal. 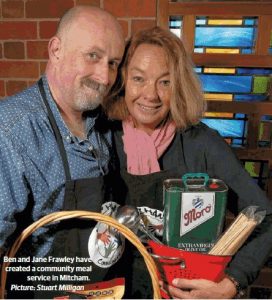 As a young child, Ben would go with his father once or twice a year to visit Ozanam House, a Catholic organisation that still offers accommodation and other services to people who are homeless, so he was somewhat familiar with the whole setup, though that was 50 years before.

Ben tells the story of two of the people he met in Mitcham.

“One guy ‘Simon’ (not his real name) had a tent set up behind some shops. I’m told that he had been on the street for 5 years like that. I went and visited him one time because he had been bashed. The side of his head was swollen and bruised. This was in the middle of winter, and it was wet and cold. I took him a hot meal and stayed and chatted with him for a while. As I was about to leave, I looked at his incredibly sad face and I hated that I was going to leave him there. Anyway I found myself giving him a hug. A few weeks later I saw him again and he was looking a bit better. As I was about to leave, I asked, ‘Is there anything else I can do for you?’

“In a feeble voice he said, ‘Can I have another hug?’

“I never really thought initially that giving him a hug would mean much.

“Another long-term rough sleeper, ‘Peter’, was also on the street for many years. He fell through the housing gaps, because he had a pet, a 3-legged dog: boarding houses don’t allow pets, and he wasn’t able to afford private rental. Also, most of his money went towards his addictions. Many people in Mitcham would have seen Peter and his 3-legged dog on a 3-wheeled pedal trike with a child/dog carriage, most not realising that he slept with his dog in an undercover car park. Homeless people are not always obvious to spot. They blend in quite well. I remember taking Peter to search for some abandoned houses for him to squat in, getting his dog out of the pound when it went missing, as well as sitting with him through a court appearance. Peter’s dog eventually died and, since then, Peter has been able to enter stable and clean accommodation. I have lost contact with him, but think he is doing okay.”

Ben greeted me with a smile and open arms. He had some time to chat this evening because another volunteer, Ping, was co-ordinating. We sat in the foyer with the cold air blowing through the door with every arrival. And it was busy! There were guests arriving on bikes, a Rotary club member, Simon, delivering bread, people bringing eggs and bananas, others unloading boxes of books, and a local resident and her teenage daughter delivering a brand-new doona. I couldn’t believe what I was seeing.

Guests lined up for pastries and bread rolls collected from Bread Street in Mont Albert, various food items from Fair Share in Abbotsford and eggs from Green Eggs in Ararat. Also available to those in need were new sheets and towels donated by an organisation called Sleep Safe.

When I asked Ben about initiating all of this, he says, “There was no grand plan. We’re still just surfing the waves.”

Ben and Jane had initially approached five church groups in the hope of using one of their halls. They had 3 quick offers and they settled for All Saints Anglican church in Mitcham, which was close to the station (an important consideration for a community meal). They began cooking on a Sunday night. It grew bigger than they expected so they sought help from the community via a Facebook page. Ben continues to be overwhelmed by the number of people and local organisations offering to cook.

“I could have filled the roster for all of 2022 by March. There have been over 800 volunteers in four years. I’m blown away by the community response.”

Ping, who was co-ordinating the evening I was there, believes that one of the reasons the model works so well is that there is a constant stream of different groups volunteering. This prevents ‘volunteer fatigue’ because each group is free to offer to cook only once or as much as they like. Ping is one of 7 facilitators who takes it in turn to oversee the running of the evening.

50-60 people now come to the Mitcham Community Meal every Sunday, some from as far away as Footscray, “for the company, as much as the meal,” says Ben. Guests start to arrive at about 3.30 on a Sunday afternoon to have a coffee and socialise.

Tulsi’s Crew and others

The family responsible for tonight’s main course were a brother and sister, their father, and the teenaged children from both of their families. They had decided to volunteer as an act of love in memory of Tulsi, their mother, wife and grandmother, described by her son as a ‘a very big giver’. They called themselves Tulsi’s Crew. Tulsi passed away last August. “This was her thing,” said her daughter, gesturing to the community around her. “She was a Buddhist, but she was just kind by nature.” 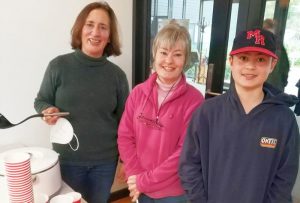 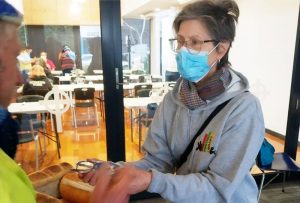 Service users helping each other

I found all these acts of love somewhat overwhelming.

I chatted to Anthony and Alfred, both regular guests, and they told me how they help others in difficult predicaments who “Don’t know how to access things.” Both men have a wealth of knowledge about where the community meals are around Melbourne, where there are beds for the night, and how to apply to Centrelink for assistance. Anthony’s companion, Aurian, had a basket of clothes delivered, washed and dried, just as she was finishing her meal.

Alfred lives in Fitzroy North but loves going ‘somewhere different every week’. Sometimes he even goes as far as Traralgon. For him it is ‘a way of meeting people, connecting them with each other’. Alfred describes himself as a service user who knows his way around the services. Tonight his companion is Christine, from Carlton. I was interested in what an important role Alfred was playing. It was he who approached the laundry service, Orange Sky, that was operating outside of the building.

So why has Mitcham Community Meal been so successful? It’s because many people find it satisfying to cook food for other people and many find comfort eating in the company of others. It’s also because people like Ben and Jane, Tulsi’s Crew, Orange Sky, Friars Foodies, Ping and James, Anthony and Alfred, all the guests, the Library People, the mother and daughter who delivered the doona and Simon from Rotary all want to connect with people and to help others connect with each other.

Says Ben, “Jane and I agree that we often get more out of the evenings than we put in. Our cooking teams always leave on a high that no chemical drug could ever give.”

* Orange Sky is a not-for-profit organisation started in Queensland by two young people. They always affiliate with other groups.

Where the organisations are

Where the meals are