Pam Jenkins, from Diamond Creek, discusses some vegetables which re-sprouted.

In mid summer, I chopped my broccoli off to ground level when it was past its prime. It had an aphid infestation and was only growing very small side shoots. I had expected the root to die and thus feed the soil. In autumn, however, when I was ready to use that part of the garden again, I discovered a group of what looked like broccoli seedlings. On closer investigation, I discovered that the root had re-sprouted and that many of these plants had their own root systems. I hadn’t planned to grow broccoli this year but volunteer plants can’t be just tossed into the compost! So I prepared a bed, transplanted them and they are now well established young plants. They are, indeed, larger than the other brassicas that I grew from 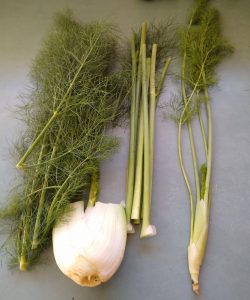 Yesterday I found something similar had happened with the florence fennel that I had allowed to go to seed over summer. I chopped it down to ground level in late summer and it has also re-grown. The fennel that I grew over summer had been a disappointment because it didn’t develop a bulb before going to seed. This latest fennel has developed a couple of bulbs from the old roots. I have already harvested one small fennel bulb and hope that the one that I left will continue to develop into a bulb closer to the size that you can buy in the shops.

The fennel that I planted in late summer is also going up to seed without producing a bulb (see photo). I wonder if I should cut it off early and try to get it to develop a bulb in the cooler weather.

Until I read up about it yesterday, I wasn’t aware that florence fennel is a perennial. It just goes to show that you are never too old to learn!

Tracey Bjorksten has written in to say that this phenomenon of re-sprouting vegetables is known as ratooning. Apparently, this technique is sometimes deliberately used in sugarcane and banana cultivation. Whilst not all plants will re-grow that way, Brassica oleracea (broccoli, cabbage, etc) is one that does so easily and Tracey has an old gardening book that advises cutting cabbages back to a stump once harvested and scoring the top of the stump to get 4 new (smaller) cabbages. In her garden, she has also had broad beans, eggplant and tomato ratoon.

Therese on pruning of fruit trees