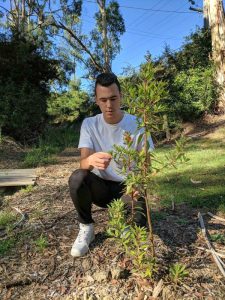 If you are a chef, wanting to use local, unusual and foraged ingredients in your recipes, the person you need to know is Liam Spurrell of Spurrell Foraging in Warrandyte South. A trained chef himself, Liam supplies around 1,200 takeaway containers of foraged ingredients to restaurants every week.

Using foraged food in high-end cuisine was seriously kicked off in 2003 by chefs Rene Redzepi and Claus Meyer at the Danish restaurant NOMA, sometimes described as one of the best restaurants in the world. The pair used wild food from the Copenhagen area, changing menus according to availability of seasonal produce.

Liam, who has worked with chefs who worked at NOMA, understands good food and how to use the ingredients he grows and forages. So when a chef says to Liam, “I’ve got this recipe. What can you recommend?” he is ready to help.

Spurrell Foraging is run by Liam together with Deb McNeil (general manager/account manager) and Megan Jacob (sales manager/farm manager). They work to keep up with what restaurants want. The plants are picked before dawn, packaged and delivered fresh on the day. On the day that I visited, Megan was out foraging for the 2,000 nasturtium leaves that a customer required. 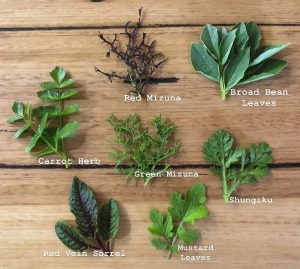 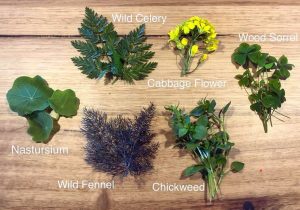 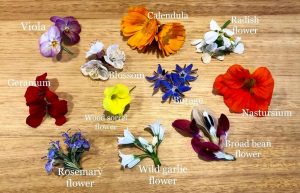 A tour of the Warrandyte South Farm

The family own a property in Silvan and also grow on one acre at their home in Warrandyte South. 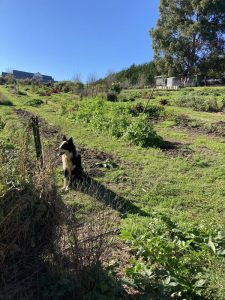 As the soil in Warrandyte is poor, the land is used strategically.

On dry rocky parts at the top of the hill, they grow saltbush and Geraldton wax, which Liam describes as “like juniper and lime”.

Nearby on this high and dry section of the growing area, the delicious turnipy-flavoured Japanese shungiku is growing profusely “where it landed”.

There is also a plant that Liam calls ‘carrot herb’. (Liam says that chefs, who are often putting in orders late at night, want the simplest names). It is also called Lebanese cress.

Further along is the mountain marigold, which Liam says many people have in their gardens. Indigenous to Peru, it has a strong passionfruit smell and, as the leaves are high in oil, they are valued by chefs because they can take higher temperatures than vegetables that are water-based. 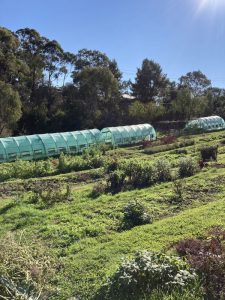 An Illawarra plum is being grown to test for viability, but it is growing very slowly in the Warrandyte soil and needs a warmer climate to be commercially useful for Liam’s business. Another plant growing slowly is the Chilean guava. It is doing much better in the rich 3-foot-deep soil at Silvan.

The strongly flavoured olive herb is next. Related to rosemary, it is also known as holy flax or santolina.

There are also the popular Australian myrtles, such as the lemon, aniseed and cinnamon species, and greens, such as mizuna, which Liam says taste much better when picked fresh rather than grown hydroponically (as they often are).

There is a large crop of cape gooseberries ripening on the ground and a greenhouse full of cold-hating begonias, whose edible leaves are apparently popular with chefs.

There are around 40 beehives on the property, this being owned by Vyvian Hiron, also of Warrandyte South. The pollination services that they provide have resulted in increased yields of Liam’s crops. The 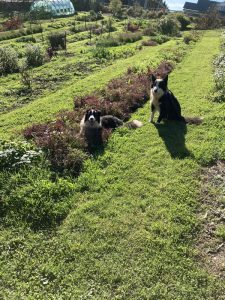 unrefined honey is distributed through Spurrell Foraging as Vyvian’s Honey and the honeycombs are popular with chefs.

The soil is continually built up with spent plants such as amaranth, shredded paper, compost and chicken litter. Seeds from spent plants are collected and stored for future planting. Jams and preserves are made from excess fruit from a neighbouring strawberry farm in Silvan and Liam intends to move on to other kinds of jam with fruits from the surrounding Silvan Farms.

Mushrooms foraged on the farm are not sold but Liam dries and powders them for his own use to add strong meaty flavour to dishes.

It is a diverse business reflecting the various needs of their customers. “We try to do a little bit of everything,” says Liam.

About 40% of the food Spurrell Foraging supplies is foraged and the rest is grown either from the family farm at Silvan or at the one acre in Warrandyte South that he works. Some ingredients, such as fruits that don’t grow well in Victoria, are sourced from South Australia and Western Australia. Although they do not have organic certification, Spurrell Foraging make every effort to be as sustainable as possible in their farming practices.

With all that variety, it’s not surprising that chefs sometimes visit to sample the plants and see what is available.

There is an abundance of food to forage all over Melbourne.

Adam Grubb and Annie Raser-Rowland have produced highly readable, informative and inspiring books on the subject and Adam’s popular weed walks are advertised on this website.

You can also check out Anna Matilda, the Urbananna, who can teach you how to forage for edible mushrooms (and avoid the inedible ones).

More information on the culinary uses of some of the plants mentioned in this article can be founded on the ABC website, Gourmet Traveller and Organic Gardener.