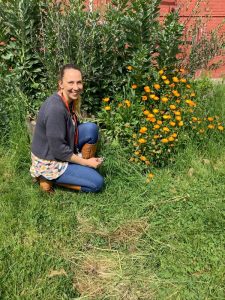 At Bedford Park Community Garden, Jess Ness, Program Manager at the adjacent community centre (Central Ringwood Community Centre), leaves water bottles filled, ready for anyone to water the garden as they stroll around. This is a small thing, but it is an example of a small thing that could make a big difference. What impact could the filled water bottles have? They could make it easy for people to contribute, make people more comfortable taking some produce, cause people to look more closely at the plants, give young kids something to do and, perhaps the biggest thing, suggest to people that they are welcome.

It reminds me of the story Malcolm Gladwell tells in his book The Tipping Point, about the often unexpected factors that bring about social and behaviour change. This is a good summary of the idea.

The water bottle gesture sums up Jess’s approach to her role. She sees the big picture but also has a feel about what to do at the daily detail level to bring about social and behaviour change. The length and breadth of Jess’s vision is difficult to convey in a short article but she is all about grassroots action for community education, zero waste, skill sharing, 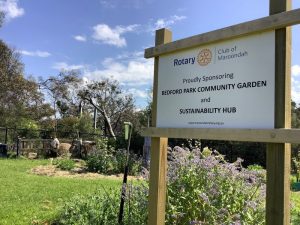 Along with her brother, Robin Hallett, Jess has been instrumental in setting up the Bedford Park Community Garden on the large piece of land the Maroondah Council has granted them to work with at the site. The garden currently has three free-forage beds with multi-grafted apples, cherries, citrus, pear, plum and pomegranate trees under-planted with vegetable and companion herbs. It has wicking beds and a crop rotation system of raised beds with annuals. The overall design includes a shed, a solar powered barbeque, large key hole communal garden beds, a bush tucker garden, a wild children’s exploration garden and a covered seating area. When I was there, I saw both members of the public and users of the adjacent community centre strolling quietly, inspecting the plants and enjoying the peace.

Says Jess, “Anyone is free to forage in the garden, to come for a stroll, graze, help themselves to some 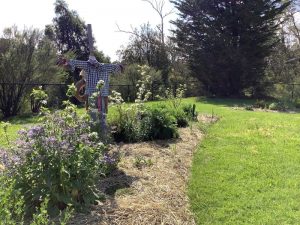 herbs and do some watering“.

It is part of Jess’s vision that the site become a centre of education and there is already an established partnership with Ringwood Secondary College, which shares a boundary with the garden. The college’s students have built a lizard rockery, done some companion planting and made an insect hotel, all projects aimed at restoring habitat.

Jess says that the idea is to make the garden an ‘intentional’, as well as a passive, learning space. Hence there are signs – hand-painted in bright colours by participants in an AETS (Australian Education and Training Solutions) program – to label the plants for members of the community who are unfamiliar with them or do not know their names. This is important for people who are newly arrived in the country and unfamiliar with the produce grown here. 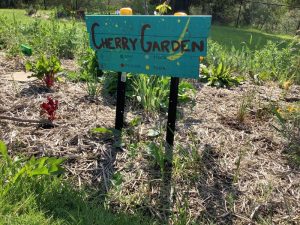 There is, indeed, a growing connection between the garden and students in the English classes that the community centre offers. The kitchen garden also provides ingredients for the Fabulous Fortnightly Feasts, usually attended by 10-15 people, at which community members have an affordable lunch while listening to guest speakers on a range of subjects. 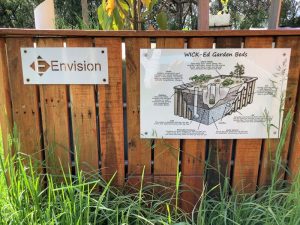 locking gates, which is not an option in any case because the land is public. Nevertheless, there is potential for vandalism in the space, and there have been a couple of trivial examples, but Jess has an enlightened attitude to this: “it is incidental“, she says. Jess believes that the more community ownership of the garden there is, the less vandalism there will be.

As the site is near the railway, there was quite a lot of neglected land nearby. To provide a habitat corridor, many natives have been planted, with the assistance of seedlings from Crisp Nursery, including endangered native orchids. Jess reports “massive growth” in the last 3-4 years.

Jess has been responsible for running an annual sustainability fair, with around 30 vendors and the presence of community groups related to permaculture. None of the stallholders pay for the opportunity to participate. The date for the 2020 Sustainability Fair will be the 9th of February from 10am to 2pm.

Jess reaches out to organisations, deliberately bringing groups together. When Jess says “people call us now“, it is clear that the outreach work  is doing its job and that Jess is at the centre of a force that is beginning to draw energy into itself. To use Malcolm Gladwell’s metaphor, these phone calls may represent a tipping point.

When I went to the Community Garden working bee, I saw the grassroots in action

I chatted to Colin, Florence, Stuart, Millicent, Sandy and Michelle and was surprised by the diverse reasons that they gave for being there on this day.

Colin and Florence seemed delighted to be working at the garden but both admitted to being a bit bemused about how they came to be there. Colin said he had come during the week with his wife to the community centre to make an enquiry about something else and found himself somehow at the working bee putting wire up and planting beans! Something to do with the persuasive power of Jess, I think. Florence says she comes to the community centre for a cooking class on Wednesdays and an English class on Saturdays and now here she was gardening with Colin, who she hadn’t met before, finding great enjoyment working together.

I also spoke to Stuart Lewin of Heathmont. Stuart has been involved in Transition Towns for more than a decade. He describes Transition Towns as “an international movement to encourage progress towards sustainable living at the local level“. There are 20 Transition Town groups across Melbourne and, at a recent convergence, there were around 120 people. For Stuart, the Bedford Park Community Garden means that Transition Towns Maroondah is now engaged in something practical, which is giving it more focus.

In 2018, Stuart completed a Permaculture Design Certificate with Peter Allen from Telopea Mtn Permaculture & Nursery in Monbulk. Jess was instrumental in this course being offered at the community centre and attended the same 2018 course as Stuart. The 2019 course had 35 students with a further 10 people on a wait list for 2020.

Stuart’s main motivation for attending the working bee was, he says, “wanting to help“. He enjoys the social connection and also the fact that gardening with others means that “you cannot avoid learning new things“. Stuart is also a member of the committee and likes that the community garden is ‘public access’. He believes in ordinary people making a difference. After all, he says, “we are all just ordinary people“. 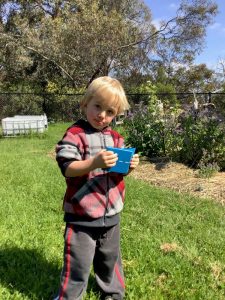 Another participant, Millicent, was there for the first time and busy planting vegetables with the help of a friend, four year old Lewis (Jess’s youngest son). Millicent grew up in a farming community in Nigeria, growing crops such as honey palm, cassava, yams, okra, melon and plantain. “I love being in the garden“, she says as, together with Lewis, we put the young seedlings into the soil.

Sandy was there with her six year old daughter, Phoebe, who was busy transporting worms between the compost heap and the garden. Sandy had originally intended to spend the day at a blacksmithing event elsewhere but six year old Phoebe had urged her to come to the working bee! This did not bother Sandy a bit. “It’s just fun isn’t it? An excellent way to spend Sunday.“

She is a keen gardener and a committee member of the community garden. Originally from Queensland, Sandy grew up eating homegrown mangoes, bananas, and persimmons and has had to learn how to grow and use the produce that grows in the Melbourne climate. Her current home is nearby. Sandy explains, “We bought the garden and it came with a run-down house!“ 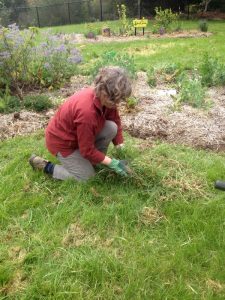 Michelle loves gardening too. She has become involved in the Bedford Park Garden because she wanted more community involvement and also “to know more about how councils work“. Michelle is concerned with the intersection of gardening, community, social change and physical and mental health. She is passionate about spreading knowledge about nutrition because, as a nurse, she sees too much ‘band aid’ treatment of people with diet-related illnesses. Michelle completed a permaculture design certificate with Peter Allen and re-designed the garden at her home in Wantirna which is on a 900 sqm site. She found that the permaculture course helped her to consolidate all the knowledge she had already accumulated and to learn by observing habitat. Michelle is also keen on raising rabbits for food, housing them over the worm farm to feed the worms with their droppings.

Michelle’s observation of habitat and her plans for the rabbits and worms are examples of permaculture principles in action, specifically, Principle 1 Observe and Interact, Principle 2 Catch and Store Energy and Principle 8 Integrate rather than Segregate.

Jess Ness is catching and storing human energy in her quest to make a difference and she has the gift of integrating all aspects of the life of the community centre to make it a thriving, vibrant hub of creative power. “We can do this“, she says. “We don’t have to wait for the government to act.” She is keen to credit others for the success of the garden, saying: “we have a committee of 12 whose enthusiasm and dedication are the reason this is such a successful and enjoyable project. I am a mere facilitator of the garden; it is very much a collaborative effort“.

Read the interview with Drew Barr for some discussion about the natural affinity of schools with permaculture.

For those who would like to know more about permaculture, a lot can be learned by reading the 12 Permaculture Principles set out by David Holmgren.

Read about the Australian branch of Transition Towns and also find ways of linking in and getting involved.