Judy Vizzari visits the garden of Emily Willocks, from Macleod.

I’m negotiating curving streets in the suburb of Macleod. These roads are mostly lined with single-storey brick veneer and weatherboard houses, small by modern measures and built last century on ‘standard’ quarter acre blocks, blocks which are oversized when compared to today’s average 600-700 square metres. Plenty of trees and bushes bristle from front yards and I see that the nature strips are neatly mowed. It’s easy to imagine children running helter-skelter down these quiet suburban backroads. I’ve entered a time warp and am back in a place just like the suburb of my youth. 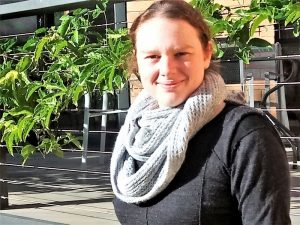 The web tells me that this area has a significant heritage which includes early housing estates, some even designed by architect Walter Burley Griffin in the early 20th Century. They were built on ‘garden suburb’ principles – the intention of the developers was to observe the land, to follow its contours, and to retain its watercourses and open areas, whilst providing its residents with spaced suburban living – I suspect that Emily’s garden, which I’ve come to see, will fit neatly into this 20th century intention.

Her cream brick house is located on a sloping rectangular block which is lowest at the rear fence. It stands high over a small north-east facing backyard and protects it from southerly winds whilst cornering day-long sunlight on its north-easterly backyard side. Emily’s access to the front of her home is via a concrete driveway which runs down the side of the street-facing house located at the front of that same block. 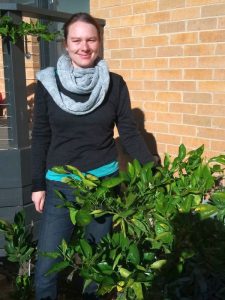 As soon as I ring the bell the front door opens and I’m met by Emily, a tall and athletic young woman with an open, friendly manner. Outside it’s cold and wet so we choose to sit in her bright sun room while I learn a little about her garden project, her background and interest in gardening.

She tells me she’s been living here for five years now and shows me a photo of the backyard taken when she arrived. I see a 10 metre square handkerchief of land dominated by a mature liquidamber, several large camellia bushes and a lemon tree. There are some small bushes inhabiting neatly laid out garden beds and, north-east facing onto the yard, is a narrow balcony which runs along the sun room wall.

Of that early garden Emily says, “I knew straightaway that I wanted to change it“. Glancing out, it’s obvious that a lot has changed in those five years.

I wonder what Emily’s background is – what initiated her interest in gardening and food production.

She tells me that she “doesn’t have a background in horticulture” so I wonder where she obtained her obvious knowledge of plants and appreciation of fresh organic food. I learn that she is eminently qualified to understand plant growth and management – she has a Degree in Conservation Biology and Ecology with Honours in Botany, which she obtained at La Trobe University in Bundoora. She now works for the Department of Environment, Land, Water and Planning in a policy role.

Through her studies, she has obtained an insight into the how and why of plant life; how plants grow, what conditions they need and why. Add her youthfulness and vigour, plus her obvious delight in fresh food grown free from sprays and chemicals, and you have the perfect mix for a home grower.

She has another trick up her sleeve, too, she tells me that gardening was part of childhood growing fruit and vegetables at home. Her grandfather also had a hobby farm in retirement where they went camping every Easter.

So what has changed in Emily’s backyard in those five years? 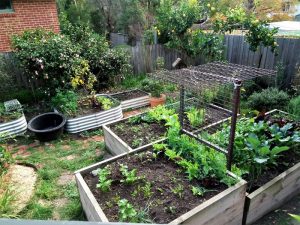 It’s time to brave the cold, so we venture out to get a close-up look at the garden. In its centre are three generously proportioned wicking beds nestled together, two with a wire frame between them, ready to support climbing plants including the very healthy peas already sliding their slender tendrils upwards. The beds are planted out with establishing brassicas, beets and leeks, as well as ‘ready for harvest right now’ lettuces, celery, radishes and herbs too. Some tiny bok choy and beetroot seedlings are just emerging – Emily tells me that she likes to keep new plants coming to replace others as their productive seasons finish.

Further on are three lower raised beds which are a product of her planning but not her carpentry skills! They are producing winter fare and, around them, I see even more ground level plots containing mixed herbs – coriander, parsley, rosemary, lavender and Greek basil.

There are other dedicated plots, too: asparagus, rhubarb, silverbeet (a descendant of the silverbeet from Emily’s grandfather’s farm), several varieties of berries (including raspberries and youngberries) and a healthy looking passionfruit vine which has draped itself over the large deck with which Emily has replaced her original balcony. 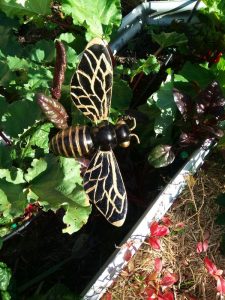 She tells me there’s a healthy bee population here, too. It includes native blue-banded bees enticed by the herbal blooms that revel even in winter’s chill. I see another conspicuous bee, too, one which no-one could miss – it’s a large brown and gold insect gracing the rhubarb plot – a bee on a wire, a monster insect retrieved (like much of Emily’s outdoor materials) from a nature strip discard and painted to a lovely brown and gold sheen. Recycling is an ongoing and important practice in this world.

Amid this lush garden are 30 fruit, berry and citrus trees, although at first you wouldn’t notice them. Why? Some are deciduous so at present leafless, some are miniature and others are still young. The more established trees have been clipped back to enable easy harvests and to cast less shade; they are also interspersed between fruiting bushes and vines, so fit seamlessly into this productive parcel.

Emily points out her hidden orchard to me. It includes 4 columnar apples, 2 dwarf pears, 5 dwarf stonefruit and 10 dwarf citruses. There is also a berry producing dwarf mulberry tree, blueberry bushes, a guava, a pomegranate and a fig. It’s surprising to see so many trees existing in such a small space.

So how does Emily nurture her plants? 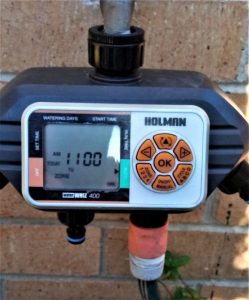 Compost: Emily is a keen composter and recycles all her kitchen green waste plus garden cuttings in a large screw top compost bin. She initially purchased soil to help fill her many containers but now finds that she can manufacture enough compost to augment her beds when they are fallow.

Water: She has a timed watering system attached to hoses which travel through the garden and can be set so that her plants remain moist even during the hottest months or while she is away – as she frequently is due to her work. The system enables her garden to thrive even when she’s absent and, she expects that in the future when her fruit trees are more established, they will “look after themselves for most of the year.” She tells me that her water-wise wicking beds provide consistent water for the annual crops and only need topping up once a week.

Predators: When Emily first moved in, possums were once a ‘huge’ problem in the garden but, by keeping plants away from the fences and removing the liquidamber tree, their impact has lessened. Now, with netting used to exclude birds from fruit and vegetable crops during productive seasons and possum visitors diminished, unwelcome callers are ‘under control.’ Snails are kept at bay by night-time ‘snail hunting’ with a head torch and this is the only deterrent needed – she finds that her blended and aromatic plantings are effective insect deterrents.

I hear that Macleod Organic Community Garden (MOCG) is a lively and fruitful venture which provides access for around a thousand members to participate in its organic food production program, workshops and community activities. Emily is a member and regularly visits the garden to tend to it, to swap produce and generally to help out. 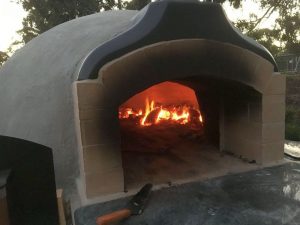 “How do you write an application for funding for a pizza oven?” Emily asks with a giggle. She remembers how once she turned her academic skills to application writing for MOCG … and the surprising result was the acquisition of a pizza oven! She says a successful application for funding had to specify how the grant would be utilised if approved. There was much input and several projects suggested. After discussion and deliberation, the consensus was that the perfect project would be to construct a state-of-the-art pizza oven and so that became the focus of her application. The result? Success! Funding was granted, the oven built, and now it’s a central focus at MOCG and features in a range of workshops as well as servicing their ever-growing membership.

It’s interesting to see how the varied skills of many, shared voluntarily, empower communities to achieve outstanding results.

It’s time to leave Emily now and we wander out to the driveway at the front of her house. She points out even more fruiting trees here including a laden cumquat, more miniature fruiting varieties and a group of native and exotic bushes. Not an inch of space is wasted.

A friendly neighbour hails us and seems to echo the value of community values. I bid farewell and return to my car, filled with the pleasure of my visit and the sights and smells of a loved and lovely place.