A bus driver was driving a whole tour bus of elderly men and women down a highway. As he was driving, one of the little old ladies tapped him on the shoulder to offer him a handful of peanuts that he gratefully accepted.

15 minutes passed and she comes back with another handful of peanuts. This happens about five more times. The bus driver finally decides to ask her, “Why don’t you eat the peanuts yourself?“

She replied “We have no teeth so we aren’t able to chew them.“

Confused, he asks, “If you can’t chew them, why do you buy them?“

She replied “We get them just for the chocolate around them. We love it!“

The oldest computer can be traced back to Adam and Eve.

Surprise, surprise, it was an Apple.

But with an extremely limited memory – just 1 byte.

Sing along to the tune of Stuck in the Middle with You by Stealers Wheel:
Trump to the left of me.
Brexit to the right.
Eire I am.
Stuck in the middle with EU.

A parody of Sweet Dreams Are Made Of This by the Eurythmics:
Sweet dreams are made of Cheese
Who am I to dis a Brie
I Cheddar the world and a Feta cheese
Everybody’s looking for Stilton

Here is a video of the parody in longer form. 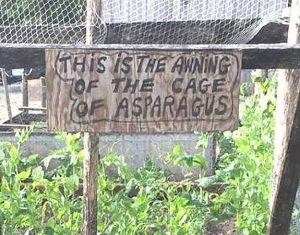 As seen by Lynne Gough and Dave Richard: this is the awning of the cage of asparagus.

For those of you who were not listening to music in the late 1960s, this sign is a play on words from the original song, this is the dawning of the age of aquarius, made famous by the musical Hair. It was first released as a single by a group called The 5th Dimension (see video) but subsequently covered by many others, including Andy Williams, Cilla Black, Diana Ross, Donna Summer, Engelbert Humperdinck and The Osmonds. 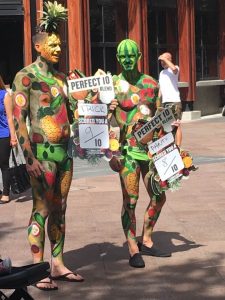 Not a joke but still funny, have a look at these two men in fruit-themed body paint, which was photographed in February 2017 by Claire Miller. As Claire says “I was watching a rather out there acrobatic busker act on Southbank by a Japanese gymnast calling himself Jackie Chan Chan when these two turned up and started scoring his act. They seemed related to possibly promoting Juice Boost but I can’t be certain. They were just such a bizarre addition to the crowd watching an already bizarre act that I snapped the photo. Cool body paint, though!“ 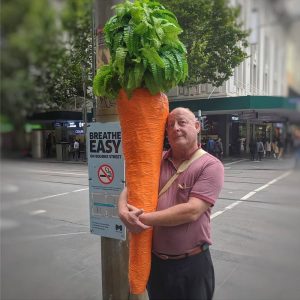 Photographed by Cath Jones, November 2019. ” I recently met ‘carrot man‘ in Bourke Street and took this picture. Apparently he is becoming something of a celebrity for being out there in public carrying an enormous carrot and making people smile.” And he has been doing it for the past six years!