Bruno Tigani is a local (Lower Plenty) wholesaler of seeds (Griffin Seeds) who periodically gives away hundreds of leek seedlings to our newsletter readers. As a wholesaler to the commercial vegetable seed industry, he receives various publications from Horticultural Innovation Australia. Bruno has written in: “Not all pesticides are equal, clearly insecticides are more harmful than fungicides to insects. In regards to insecticides, biological insecticides are relatively ‘soft’, in that they do not harm beneficial insects as much as synthetic chemistry does. Also, being able to recognise the beneficials among various pests in the garden is key to having the confidence to let nature take its course and not immediately rush to a chemical pest solution. Hort Innovation has produced some guides on the effects of pesticides on beneficial insects. Whilst these guides are aimed at commercial producers, they contain some good information relevant to home growers.”

Here are the guides:

Morag Gamble is a permaculture person who lives in Queensland and has a variety of websites and blogs. She has recently started producing a series of videos under the heading sense-making in a changing world and featuring people such as David Holgren and Mariam Issa. She is also a prolific publisher on Youtube. (posted July 22 2020)

A website called Phenomenon is trying to transform food education for Australian children via a mixture of podcasts and lesson plans. (posted October 30 2019)

I was visiting a local community garden the other day and someone asked me to identify a particular plant. So, I got my phone out, took a picture and voila: Sambucus nigra (European black elderberry). Some free plant identification plant apps for smartphones really do work! The two that I have found to be the most effective are PlantNet and PlantSnap. (posted October 23 2019) 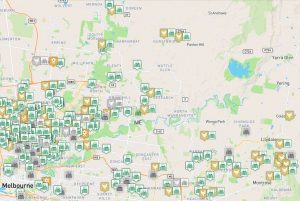 ShareWaste “connects people who wish to recycle their kitchen scraps with their neighbours who are already composting, worm-farming or keep chickens. Now you can divert waste from landfill while getting to know the people around you!“. It’s free and easy to use. You can either sign up to receive scraps (in which case, you can specify what scraps you do/don’t want to receive) or you can browse a map of ‘scrap receivers’ and choose who to offer scraps to. There are currently around 130 ‘scrap receivers’ from around North East Melbourne who have registered with the website.

I’ve briefly mentioned ShareWaste in the past but I haven’t given it much attention as no one has ever contacted me since I became a ‘scrap receiver’ a couple of years ago. But, prompted by Morgan Koegel from 3000acres, I’m now finding out that this is because of where I live (Eltham) and that things are much more active both westwards and southwards. For example, newsletter reader Katrina Forstner (Preston) receives scraps from around 30 households. (posted January 2 2019)

Austral Herbs online shop has a massive range of dried herbs including, for example, 367(!) different Certified Organic ones. (posted July 25 2018) 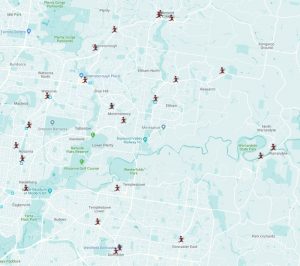 Responsible cafes is an Australian website which aims to reduce the number of single-use coffee cups and lids that are used. It includes a map where you can type in an address and it tells you which local cafes offer a discount for byo cups. So, for example, the nearest for Eltham residents are Platform 3095 (Eltham), BP (Eltham), Health Bar Melbourne (Research), Boots & Barley Cafe (Montmorency) and The Milkbar Cafe & Patisserie (Montmorency). (posted June 20 2018)

FoodChecker is a new online way to assess foods and drinks against Victorian food and drink guidelines. You can assess your existing menu, products and recipes, or use FoodChecker to plan future menus and find GREEN and AMBER products. (posted November 15 2017)

The Australian Fair Food Forum is a new forum for discussing how to build a fairer food system in Australia. It’s a place both to ask questions and to share resources and lessons learned. The forum is launching with support from a wide range of food organisations across the country including: Open Food Network; The Australian Food Sovereignty Alliance; Right to Food Coalition; Food Connect; Melbourne Farmers’ Markets; the Fair Food Challenge; Farmer Incubator; 3000 Acres; the Youth Food Movement Australia; Sunraysia Local Food Future; and the Organic & Regenerative Investment Co-operative. (posted May 10 2017)

Gardenate.com is a website that helps you decide what to plant when. It has three different manifestations, for each of which you can choose your climate zone (e.g. ‘Australia – temperate’ for Melbourne):

The list of veggies and herbs covered is comprehensive (more so than ours). Its planting schedule is similar to ours, with the exceptions of brassicas and cucurbits (where it is somewhat idiosyncratic). (posted April 5 2017)

Love food, hate waste: a nicely presented website brought to you by The Victorian Government and delivered by Sustainability Victoria. (posted December 31 2016)

Some books and films

A food swapping website: Spare Harvest: a new website (and app) which is designed to enable local communities to help connect, share, swap and sell all things related to gardening and growing food. (posted November 30 2016)

Or the book entitled Street Farm: Growing Food, Jobs and Hope on the Urban Frontier. Here is what someone said about it: “Ableman was asked to start urban farms in the toughest areas of downtown Vancouver. His book is a series of thoughtful, personal, and remarkably frank essays about how he turned vacant lots and parking lots into vegetables while engaging with the locals, coping with the city bureaucracy, dealing with landlords desperate for more parking space, and managing the hazards of trying to make this work among people beset by poverty, alcohol, and drugs. But he did make it work and this book explains how you too can do this. Street Farm is an elegant how-to manual on using farming to do real community work with populations classically hard to reach but thriving on such initiatives.”

Also links to articles about Detroit urban farmers and a mobile farmers’ market in Austin, Texas.

And some links to Melbourne-wide organisations: Food Bank and SecondBite. (posted August 31 2016)

Sustainable Gardening Australia’s (SGA’s) food-related posts: you can find all of their edible gardening posts listed on the following three pages:

Weekend Notes is a website & newsletter which covers all types of events across Melbourne. It usually costs $75 to list an event but “charity events with an average ticket price under $50 and free community-run events are eligible for submission to the suggestion box at no charge.“. It appears that quite a lot of people read Weekend Notes. For example, last year we submitted a free entry for Eltham Farmers’ Market’s 1st birthday and 1,500 people reportedly read the article. (posted May 25 2016)

Chocolab is a website which allows you to design your own customised bars of chocolate. For cost reasons alone, this is probably not the sort of thing one would do often. But, as a treat for yourself or someone else, it has great novelty value. (posted May 11 2016)

My productive backyard: this is for those of you looking for ideas on how to successfully grow more food. (posted July 17 2014)

Succession in vegetable planting: If you are interested in a well described process of having lettuce’s all year, go to Linda Woodrow’s blog, the Witches Kitchen. (posted February 27 2014)

Shareable: Lots of interesting stories here. I like the story The Sharing Garden Shows the Way to a Moneyless Food System. (posted January 30 2014)

Organic farming potential: At this site they write that organic farming has the potential to contribute to sustainable food security by improving nutrition intake and sustaining livelihoods in rural areas, while simultaneously reducing vulnerability to climate change and enhancing biodiversity. (posted July 11 2013)

The ‘Guide to Ethical Supermarket Shopping’ is completely revised and updated, with the new branding of ‘Shop Ethical!’. This new edition includes new company ownership charts, improved categorisation, new blurbs, and lots of tips for shopping beyond the supermarket. (posted November 29 2012)

ABC recipe page: Did you know that the ABC has a recipe page? Unusual recipes as well as the old favourites can be sent through to your email by an RSS feed. (posted November 22 2012)

My darling lemon thyme is a blog by a young West Australian chef and mother of two young children. She shares some tasty vegetarian and vegan recipes with all her readers. (posted November 15 2012)

Check out some of the online seed providers. The Lost Seed, also Tasmania. Eden Seeds and Green Harvest, both in Queensland. (posted July 26 2012)

One Response to “National and other food websites”