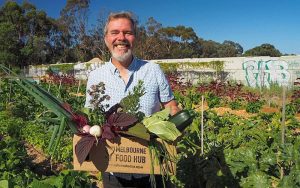 Nick is the director of Sustain : the Australian Food Network, an organisation that he founded after having previously written a PhD thesis on the global movement for food sovereignty. He believes that it is important to understand the collective contribution of people growing edible gardens in cities all over the world and encourages us to see ourselves as part of a movement that goes far beyond our own backyard. He also believes that access to good food at all times is a human right and is fundamental to the dignity of a person. And he advocates for a participatory and democratic food system in which decisions are not made in boardrooms and the lobbies of governments.

Consistent with these beliefs, Sustain promotes collective action towards the development of new food systems for cities and is working towards acknowledgement by local, state and federal governments of a defined ‘urban agriculture’ sector in this country.

Nick has seen innovative models of urban agriculture, often using underutilised and vacant land all over the world, in South American countries such as Guatemala and Argentina, in North American cities like Detroit, Milwaukee, Chicago and Toronto, and in Jakarta. As a result, he sees much potential benefit in using vacant land in Melbourne to grow food

In Indonesia, Nick encountered La Via Campasina, an international peasants’ movement of small farmers and indigenous people which was then based in Jakarta. The organisation is currently working against hunger in Brazil, supporting peoples’ struggle for land in the Philippines, fighting for the rights of migrant workers in Europe, helping with the relief effort in Pakistan and always trying to ‘articulate a different visions and future for food and agricultural systems’ and to explore the potential and prospects for change in this area.

He has also observed the city of Seoul’s plan to allocate billions of dollars to urban farming projects, with the intention of having 1,000,000 million farmers in a city of 10,000,000 making use of 240 hectares by 2024, and ‘build[ing] communities of urban farmers’.

Here are some of the Melbourne initiatives that Nick and Sustain have been involved in.

Launched by Sustain in 2018, The Melbourne Food Hub at 2 Wingrove Street Alphington is an urban farm and classroom. It also leases to some small food-related enterprises (including Farmwall, Sporadical City Mushrooms and The Mushroomery).

This project promotes a fair food system for all Cardinia Shire residents, emphasising food literacy in the community, promoting fresh, seasonal, local produce, and advocating to ‘control the density and proximity of fast-food outlets to vulnerable communities’ as well as for creating livelihood opportunities in food production and distribution.

This urban farm operates out of an abandoned vicarage on the corner of Plenty Road and Tyler Street in Preston. The land is planted out with veggies and is maintained by volunteers.

‘A ‘food is free’ initiative, all of the produce grown on site is distributed amongst the Oakhill volunteers and through local food relief initiatives.

The farm is connected with Preston Primary School which has a passata project using wicking beds at the site to grow tomatoes, as part of their Seed to Stomach Program.

By offering training in urban agriculture and peer-to-peer networking opportunities, Nick believes that the farm not only builds food systems literacy but also empowers community members with new skills and stronger social connections.’

What are Australian governments doing?

Nick says that local councils in Australia have been at the forefront of government support for the emerging urban agriculture sector, being, says Nick, “the level of government in Australia most responsive, accessible and connected to community”.

But, says Nick, so far State and Federal Governments have been harder to influence, still viewing urban agriculture as a hobby and a niche not big enough for them to deal with.

Nevertheless, he is encouraged that the Victorian Government, through its acknowledgement of the artisan sector in Victoria, is talking about a ‘local food economy’. Sustain also recently worked with Agriculture Victoria to map urban agriculture in Melbourne, Bendigo, Ballarat, and Geelong. Nick notes that the Covid crisis was an opportunity for the State Government to take notice of the sector and that it put together a ‘Food Relief Task Force’ to address the problems of families experiencing financial stress was committed to improving both the ‘access and quality’ of the food available.

So, to summarise, Nick argues that the local food movement is much broader than just growing healthy food – it is also about human rights, dignity and social justice and can be seen in a new political ecology at the global level responsive to the climate and poverty challenges we face globally.

So, having read some of Nick’s views, what thoughts have they stimulated for you? How much food could we grow in urban Melbourne? How much vacant land could be unlocked in Melbourne by local councils? How much food could be grown on verges and in new housing developments? Could every suburb sustain a community garden? Are you just planting a garden or are you part of a global movement for positive change?

Reclaiming the Urban Commons: The Past, Present and Future of Food Growing in Australian Towns and Cities by Nick Rose and Andrew Gaynor (Eds).

A May 2022 podcast between Nick Rose and PIP magazine.